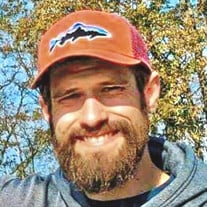 Andrew Short was born on September 29, 1988, in Laurel, Mississippi, and died on March 6, 2022, in Lawrenceburg, Tennessee. Andrew was the oldest of three sons born to Michael and Theresa Short. From an early age. Andrew enjoyed spending time outdoors. He was an avid animal lover. Andrew was a 2007 graduate of Columbia Central High School and went on to attend Tennessee Tech University. Andrew enlisted in the United States Army and was a member of the 82nd Airborne stationed in Fort Bragg, North Carolina. After leaving the Army, Andrew spent time exploring a number of different jobs. He spent time in banking, tree trimming, and food service. He most enjoyed the opportunity to work for a big game elk hunting outfitter in Colorado for a season. Andrew is survived by his parents: Michael and Theresa Short and brother, Christopher Short all of Columbia, Tennessee; his paternal grandmother: Marna Short of Cabot, Arkansas; aunts and uncles Preston and Cherie Short (NC), Darna and Mark McGinnis (TX), Patricia and Todd Farnsworth (AR), and James and Kristin Covey (TX). Andrew is also survived by his cousins Scarlett (Nathan) Freeman, David (Jackie) McGinnis, Trevor (Kelly) McGinnis, Shawn McGinnis, Emma, Isabel, and Jack Farnsworth, and Reiger Covey. Andrew is preceded in death by his brother: Joshua Short, paternal grandfather Edward Short, and maternal grandparents James and Lynn Covey. The family will hold a memorial service and Celebration of Andrew’s Life at a later date. In lieu of flowers, donations can be made to the Maury Regional Foundation Behavioral Health Fund or the Maury County Animal Shelter. Williams Funeral Home is in charge of the arrangements. You may share your memories or sympathies at www.williamsfh.com.

Andrew Short was born on September 29, 1988, in Laurel, Mississippi, and died on March 6, 2022, in Lawrenceburg, Tennessee. Andrew was the oldest of three sons born to Michael and Theresa Short. From an early age. Andrew enjoyed spending time... View Obituary & Service Information

The family of Andrew Michael Short created this Life Tributes page to make it easy to share your memories.

Send flowers to the Short family.