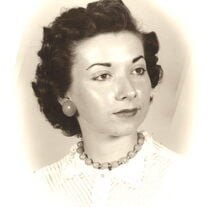 Betty Joann Eubank Davis, age 87, a longtime resident of Columbia, passed away on January 22, 2021, at Maury Regional Medical Center as her daughter held her hand and talked about their life in the 1950s. Betty Jo was born in Giles County, Tennessee, on March 3, 1933, to dairy farmers Andrew Jackson "Jack" Eubank, Jr., and Myrtle Lee Everett Holley Eubank. Betty Jo grew up in Giles County and moved to Columbia at age 16 after marrying Jeff Hanvy, Jr. They had three children. Betty worked in several sewing factories in Maury County and as a secretary in a downtown office and was a salesperson in the old Rose's department store. She later married Walker Davis. Betty had a youthful spirit even into old age. She loved music and enjoyed singing in her fine soprano. She wrote poems and songs and had beautiful handwriting. Dogs, cats, and birds gravitated to her, including animals who were afraid of other people. Betty had been partial to dogs, but a homeless cat showed up in the last year of Betty's life and adopted her. A good Southern cook with a talent for cakes and fried pies, Betty made perfect biscuits, with a crispy crust and soft interior. She enjoyed crocheting earlier in her life and was always up for shopping thrift stores and yard sales. Betty had a strong spiritual sense and a strength of spirit that prevailed through several life tragedies, including the early deaths of her father and her brother and the murder of one of her daughters. She knew hardship and could make a way out of no way. Betty Jo is survived by her children Donna Hanvy Locke (Jerry) of Columbia, and Kevin Hanvy (Karen Vaughan) of Boiling Springs, South Carolina. She is also survived by her grandchildren, Brooke Locke (Stephanie) of Powder Springs, Georgia, and Maria Locke (Ben Clayton) of Decatur, Georgia; and her great-grandchildren, Rachel Locke, Everett Locke, Roxanna Clayton, and Cash Clayton of Georgia. She is also survived by a niece, Sarena Wood, and by stepdaughters Linda Davis Knowles of Columbia, and Kaye Davis Walters of Hampshire. She leaves behind Jackie, the angel tomcat. Betty was preceded in death by her parents; her brother, William "Billy" Eubank; her sister, Frances Eubank Humm; her daughter, Sheryl Hanvy; her second husband, Walker Davis; two nephews, Vincent and Carman Wood; the father of her children, Jeff Hanvy; a special cousin, Billy Ray Rudd; and by her dogs Sasha, Cody, Peanut, and Jody. There will be no public services. The family will gather privately. Betty's ashes will be buried beside her daughter's body in Rose Hill Cemetery. Williams Funeral Home & Crematory is assisting the family with arrangements.

Betty Joann Eubank Davis, age 87, a longtime resident of Columbia, passed away on January 22, 2021, at Maury Regional Medical Center as her daughter held her hand and talked about their life in the 1950s. Betty Jo was born in Giles County, Tennessee,... View Obituary & Service Information

The family of Betty Davis created this Life Tributes page to make it easy to share your memories.

Send flowers to the Davis family.