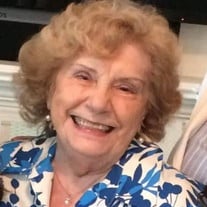 Narcio, Blanca Dora. It is with deep sadness we share with you the loss of our sweet mother on Friday, April 23rd, 2021, just one month shy of her 99th birthday. Funeral services will be held at the Williams Funeral Home in Columbia, TN on Friday, April 30th. Visitation will be from 2:00 PM to 4:00 PM, with a memorial service beginning at 4:00 PM. A private graveside service will be held at Sunset Hills Cemetery in Flint, Michigan the following week. Blanca was born on May 29, 1922, in Laredo, Mexico to Otila and Jesus Gonzalez. She married Salvador Narcio on May 12, 1947, who lovingly called her "Chula" and she moved with her husband to Flint, Michigan in 1954 where they happily raised their 6 children. They shared 46 memorable years of marriage. They both became proud US Citizens in 1981. After the passing of her beloved husband, she moved to Franklin, TN in 1995 and has loved living there ever since. Blanca is survived by her brother Oscar Gonzalez, who lives in Guadalajara, Mexico (who loved to call her "Chaparita") with his wife Chena. She will join her four sisters in heaven: Otila Franco of Los Angeles, California, Anna Maria Lecea of San Antonio, TX, and Gloria Kehoe of Grand Blanc, Michigan. She will be missed terribly by her loving children: Salvador (and wife Debbie) Narcio of Flint, Michigan, Jose (and wife Dawun) of Franklin, TN, Fernando (and wife Gina) Narcio of Franklin, TN, and Felipe Narcio of McAllen, TX and her two daughters Maria Basiwicz of Springhill, TN and Blanca (and husband Steve) Miller of Holly Springs, NC. Blanca was blessed to have nine grandchildren and ten great-grandchildren who brought her so much joy. Blanca was a devout catholic and a member of St. John Vianney Catholic Church in Flint, MI, and at St. Phillips Catholic Church in Franklin, TN. Throughout her life, she enjoyed watering her lush flower gardens, but most of all, she was her happiest surrounded by her loving family and friends. Known as "Momsy", she will always be remembered for her love of laughter. She was truly a family treasure. In honor of Blanca Dora Narcio, memorial donations can be made to the American Heart Association, The Evans Scholar Program, JDRF, or the Epilepsy Foundation. Williams Funeral Home is assisting the family with arrangements. Condolences can be given to the family online at www.williamsfh.com

Narcio, Blanca Dora. It is with deep sadness we share with you the loss of our sweet mother on Friday, April 23rd, 2021, just one month shy of her 99th birthday. Funeral services will be held at the Williams Funeral Home in Columbia, TN on... View Obituary & Service Information

The family of Blanca Dora Narcio created this Life Tributes page to make it easy to share your memories.

Narcio, Blanca Dora.
It is with deep sadness we share with you...

Send flowers to the Narcio family.