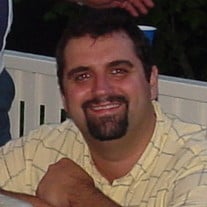 Brian Keith McNeece, age 51, passed away on January 11, 2021, with his loving family by his side. Funeral services will be conducted at 2:00 p.m. on Sunday, January 17, 2021, at Polk Memorial Gardens in the Arbors Pavillion with Rev. Mark King, Russ Adcox, and Randy McNeece officiating. The family will visit with friends from 12:00 p.m.- 2:00 p.m. in the Arbors Pavillion preceding the funeral service. Born on December 26, 1969, in Maury County, he was the son of the late Bruce Ray McNeece and Betty Lou King McNeece. He was a graduate of Mt. Pleasant High School in 1988. He received his Associate of Applied Science (AAS) from Columbia State Community College and a Bachelor of Science (BS) at Middle Tennessee State University. Brian's professional career with Passport Health Care Communications, which is now Experian Health, began in 1998. He was one of the first Software Architect professionals hired at Passport Health Care Communications at its beginning. He was Senior Software Developer from 1998-2006. Software Development Manager, Payer Applications 2002-2006, Senior Product Architect 2006, Director of Product Development 2006-2008. Vice President of Product Architecture 2008-2015, Vice President of Product Architecture, Performance Czar 2015-2016. In July of 2019, he was the lead inventor of a program, Coverage Discovery, which received a U.S. Patent for Experian Health Inc. This program searches for health care coverage for patients that may not know they have coverage. It plays a large role in helping hospitals, physicians, and patients nationwide by ensuring the patient gets the medical attention they deserve. From January 2016 to December 2017, he was Software Development Manager for EnableComp, Franklin TN., after which, he was software Development Consultant for Infoworks, Nashville, TN from May 2018 to August 2018. Brian's love for computers and the IT field began at a very early age and continued throughout his life. He unselfishly and humbly shared his knowledge with countless others to help them further their careers. As a young boy, Brian loved being at his granny and granddaddy King's house, where he and Bradly would go to the creek and catch minnows and crawfish in their homemade traps. Later as a young man, he loved going to Brimstone in East Tennessee on four-wheeler excursions with his Uncle Bubba, Bradly, and Stephen. But most of all, Brian had a deep and sincere love for his wife and daughters, whom he always called "My Girls". Brian is survived by his wife Shaun Marie McNeece, two daughters: Meagan Marie McNeece and Madelyn "Maddy" Brynn McNeece and fiancé Benjamin Edwards of East Tennessee; mother: Betty Lou King McNeece; one brother: Bradly King (Kelly) McNeece; sister-in-law: Shannon (Josh) Adkison; nieces: Hannah Ranee McNeece, Reagan Nichole McNeece, Emma Rose Adkison; one nephew: Eli Joshua Adkison; mother-in-law: Alice Edmondson; father-in-law: Ricky (Cathy) Mobley and many uncles, aunts, and cousins. Brian was preceded in death by his grandparents: Mr. and Mrs. Clifford (Nora Marshall) King Sr. and Mr. and Mrs. William Arthur (Alice Boyd) McNeece. Pallbearers will be Bradly McNeece, Seth Brown, Ken Dark, Kevin Hight, Robby Bolton, Josh Adkisson, Tim Brewer, and Kevin Hulvey. Special instrumental by Benjamin Edwards. In lieu of flowers, the family requests that memorial donations be made to one of the following organizations. Place of Hope - www.placeofhopetn.com Jack Gean Shelter for Men 50 East End Drive Savannah, TN 38372 731-925-8619

Brian Keith McNeece, age 51, passed away on January 11, 2021, with his loving family by his side. Funeral services will be conducted at 2:00 p.m. on Sunday, January 17, 2021, at Polk Memorial Gardens in the Arbors Pavillion with Rev. Mark King,... View Obituary & Service Information

The family of Brian McNeece created this Life Tributes page to make it easy to share your memories.

Send flowers to the McNeece family.