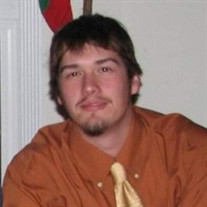 Christopher "Chris" Logan Potts passed away suddenly on September 17, 2021, at the age of 35, in his hometown of Knoxville, Tennessee. He was born to Anne Logan of Knoxville and the late Terry Potts of Dandridge (formerly of Santa Fe) on June 6, 1986. Growing up in rural east Tennessee, Chris developed a love of the outdoors, especially fishing, camping, and kayaking. His early years were filled with running around outside and spirited video game matches with his brother. An avid basketball lover, Chris loved to play and was a die-hard Lakers fan - even making yellow and purple his favorite colors. Chris' life was always filled with animals, dogs especially being his passion. Even in his final weeks of illness, he talked frequently about his beloved pugs. Chris was passionate about donating his time as a "big brother" and cherished mentoring his "little brother", Chaz. He will be remembered for his quick wit and ability to find humor and kindness in even the most challenging life circumstances. Chris was married to Courtney Maynord of Knoxville and is survived by his mother, Anne (Timm) Logan of Clinton; sister: Laura Potts of Knoxville; identical twin brother: Daniel "Logan" Potts of Knoxville; and grandmother Betty Logan, of Oak Ridge (formerly of Columbia). He is preceded in death by his father Terry Potts and grandparents Merle Logan of Columbia, TN, and Esther and RL Potts of Santa Fe, TN. The celebration of life service will be held at Williams Funeral Home in Columbia, TN on Saturday, September 25, 2021, with visitation at 11:00 a.m. and service at 12:00 p.m. In lieu of flowers, the family requests memorial donations are made to the Big Brothers Big Sisters of East TN www.tennesseebig.org/donate/ 318 N. Gay Street, #100 Knoxville, TN 37917 Williams Funeral Home is assisting the family with arrangements. Condolences can be given to the family at williamsfh.com

Christopher "Chris" Logan Potts passed away suddenly on September 17, 2021, at the age of 35, in his hometown of Knoxville, Tennessee. He was born to Anne Logan of Knoxville and the late Terry Potts of Dandridge (formerly of Santa Fe) on June... View Obituary & Service Information

The family of Christopher Logan Potts created this Life Tributes page to make it easy to share your memories.

Send flowers to the Potts family.