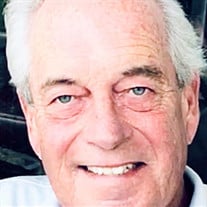 Daniel Graham McCarty, Columbia, Tennessee, died on Friday, July 23, 2021, after a short battle with cancer. Dan was born June 27, 1947, in Charleston, West Virginia, to the late William Louis and Anna Jeannette (McCormick) McCarty. Dan is survived by his beloved family: his wife, Flora Keith “Kayce” Cawthon McCarty; his children, Jennifer Elaine (Charles) Sealing, Christine Erin (Shawn) Gerhard, Emily Flora Keith Stoker, and Gordon Alan Stoker. Dan was the oldest of five sons and is survived by his brothers, David (Mary) McCarty, Donald (Linda) McCarty, Douglas (Sookjae) McCarty, and Dwight (Debbie) McCarty. He was the proud uncle to his nieces Lisa Hagan, Caitlin McCarty, Meredith Meuse, Alexandra McCarty, Jeannette Styles; and nephews John Hagan, William McCarty, Daniel “Ryan” McCarty, and James McCarty. Dan also leaves behind many precious grandchildren, grandnieces, and grandnephews. Dan studied at Lehigh University and Drexel University in Pennsylvania. He worked for several companies including Sperry, Unisys, and Verizon. His favorite times were spent with family. If he could combine those visits with his other loves, golf, and scotch, then life was perfect. He really enjoyed his time as a volunteer for the PGA and LPGA tournaments where he was able to assist in several ways and watch golf from the course – true happiness. Anyone who knew Dan, knew he loved music and singing – especially singing. He was part of a Barbershop Choir in Sacramento, California, as well as helping coordinate the Sacramento Jazz Jubilee for many years prior to moving to Tennessee. The family wishes to thank the wonderful staff at Life Care of Columbia. There are too many to list them all, but Dan had three ladies who took care of him and made our days brighter: Becca, LaTeisha, and Velois. Their love, laughter, and kindness are gifts beyond measure. Special thanks also to the Maury Regional Cancer Center. Everyone there was so kind and caring, they always made sure Dan was comfortable – whether with warm blankets, cold water, or a laugh. There will be a private memorial service held in October which will be followed by a wake – a proper sendoff for our proud Irishman. In lieu of flowers, please consider donating to First Tee of Tennessee (https://www.firstteetennessee.org/), to Shriner’s Hospital for Children, or to a charity of your choice. Williams Funeral Home (williamsfh.com) is assisting the family with the arrangements.

The family of Daniel Graham McCarty created this Life Tributes page to make it easy to share your memories.

Send flowers to the McCarty family.