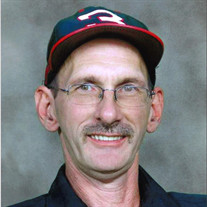 David Walker, age 55, left this world too soon on Monday, March 14, 2022, in Summertown, Tennessee. David was born to the late David Winfred Walker and Rhonda Diane Hale Moore on April 2, 1966, in Nashville, Tennessee. If you knew David, you would always see him wearing a Dale Earnhardt ball cap with his signature mustache while smoking a cigarette (either a Camel or a Marlboro), while enjoying a fresh cup of brewed Folgers coffee with cream and sugar. Anytime you came to visit, you would always be welcomed by the aroma of fresh-brewed Folgers coffee and find him behind his desk captivated by his computer with the TV on. Home was his favorite place in the world. Not only was he a big NASCAR fan, but he was a diehard Dale Earnhardt fan. David never missed a race while wearing his favorite #3 t-shirts. During his downtime, he would dive headfirst into World of Warcraft while The Sopranos TV marathon played in the background. He dedicated more than 12 years engrossed in the game, building his main character, Dezii, and building online friendships within his guild. Some of these friendships even spilled out into his regular life. He was even able to draw his kids and wife into the game as well. He loved music, especially his favorite band, KISS. He enjoyed going to concerts, whether it was alone or with his wife, Chalesta. He even drove his wife and two daughters to Indiana to see them live in concert. And of course, it wouldn’t surprise many that KISS music was played at their wedding. David was a handyman. He could repair anything! From changing the oil in your car to repairing your cell phone, rebuilding your house, or making your A/C work properly, you needed it repaired, he was your man. David was always good for a laugh, which sounded more like a chuckle with a half-smile. If he didn’t like something, he’d always let you know with the simple phrase “I’m not a fan”. David was a generous soul, with a forgiving nature who would help anyone. He would give the shirt off his back to anyone who needed it. He touched everyone around him. David was a devoted husband, loving father and brother, and caring friend. He will be deeply missed by all the lives he’s touched. David is survived by his loving wife, Chalesta Walker; children: Larissa Walker, Kevin (Samantha) Walker, Jesse (Felisha) Walker, Justin “J.J.” (Amber) Walker, and Tony Walker; grandchildren: Mackenzie, Bryce, Caroline, Kaden, Cameron, Bentley, Maleaha, Harmony, CJ, Acelan, and Wesley; siblings: Barbara (John) Henry and Lanny (Jenny) Leek; nieces and nephews: Tiffany, Steven, Christopher, Wyatt, Johnathan, and Morgan. A memorial service for David will be held Tuesday, March 29, 2022, at 1:00 PM in the Chapel at Williams Funeral Home in Columbia, Tennessee. Please consider donations to help the Walker family during this difficult time, you can visit https://gofund.me/e1e1d20b Williams Funeral Home is assisting the family with arrangements. Condolences can be given to the family by visiting www.williamsfh.com

David Walker, age 55, left this world too soon on Monday, March 14, 2022, in Summertown, Tennessee. David was born to the late David Winfred Walker and Rhonda Diane Hale Moore on April 2, 1966, in Nashville, Tennessee. If you knew David, you... View Obituary & Service Information

The family of David Walker created this Life Tributes page to make it easy to share your memories.

Send flowers to the Walker family.