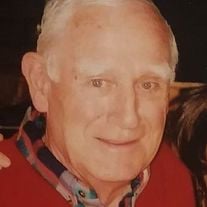 Dr. David Vance Youmans, 85, a thirteen-year resident of Pulaski, TN, passed away on September 23, 2020. He was much loved and is now missed by all who knew him. Born late to aging pioneer parents, Thomas W. and Floy Caldwell Youmans, David was born on the North Dakota prairie on April 1, 1935. Seven years of bad harvests, a dust bowl, and the Depression compelled his family to migrate by horse and wagon to the hills of northern Idaho in 1937. It was in the Idaho hills where David grew up and entered into an international career while yet in high school. He served as an international foreign youth exchange to Colombia, South America, in the early 1950s, and began studies for his first two bachelor's degrees in agriculture (University of Idaho) and foreign trade (Thunderbird) with an international focus. David first began his international work as a professional in 1960 as a tech rep with Rohm & Haas, a position which landed him again in South America where he met his wife Julia Correa. Throughout the 1960s, David diversified his internationalism while serving as a Peace Corps volunteer and then as a supervisor in Colombia, a deputy area director for CARE in Egypt and Gaza, and a staff development specialist with Potlatch Corporation on the tropical Pacific Coast of Colombia. This trend continued when he became country director for Plan International in Colombia, Brazil, and Bolivia, appointments which occupied most of the 1970s. After two decades of offshore living and working, he met the challenge of his desire to repatriate to the US and obtained a faculty appointment with Washington State University (WSU) as a county, then area extension agent in the Hispanic, Native and agricultural communities of Central Washington State. Not long into this appointment, his university recognized his international expertise and appointed him chief of party for the Lesotho Farming Systems project in Africa and the Jordan Valley Agricultural Science project in the Middle East, two long-term appointments that occupied most of a decade. He was on assignment in Lesotho when he completed his doctoral degree in extension education at the University of the Orange Free State in the Republic of South Africa. He was also advanced to full professor on that same assignment. Returning to Washington in 1988, he continued his international work with WSU as the extension specialist responsible for the international marketing and production of Washington State agricultural commodities and trade-short-term projects that increased the flow of agricultural products to markets in many countries on all continents. His leadership and mentoring roles served the world well. In 1995, he was named to the University of Idaho's Hall of Fame for innovation in developing international extension programs throughout the world. David retired in 2005 after a half-century of international work in all corners of the world. A few years on the Gulf Coast of Florida prompted him, together with his wife Julia, to relocate to Middle Tennessee in 2007, where he spent the last thirteen years of his life. His was a life well-spent, during which tens of thousands of people benefited greatly from his wisdom, his vision, and his direction. David was predeceased by his parents and all of his siblings, and he is survived by his wife of 58 years, Julia Correa Youmans, his three sons, Ricardo, Sergio, and Vance, 14 grandchildren, and 16 great grandchildren. Williams Funeral Home & Crematory of Columbia, TN, is in charge of arrangements. https://www.findagrave.com/memorial/215987194/david-vance-youmans

Dr. David Vance Youmans, 85, a thirteen-year resident of Pulaski, TN, passed away on September 23, 2020. He was much loved and is now missed by all who knew him. Born late to aging pioneer parents, Thomas W. and Floy Caldwell Youmans, David... View Obituary & Service Information

The family of David Vance Youmans created this Life Tributes page to make it easy to share your memories.

Send flowers to the Youmans family.