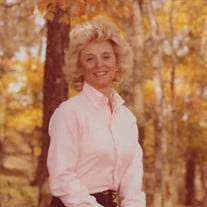 Diane Benson Fink, age 86, passed away peacefully on November 28, 2021, at NHC Cool Springs in Franklin, Tennessee. Diane was born in Nashville, TN on January 13, 1935, to William Duncan and Ruby Gentry Benson. She and her two sisters grew up in Columbia, TN where they were avid horse riders. Diane was active in the High School band and a cheerleader and an avid sports fan. Diane was an accomplished professional, having graduated from Vanderbilt University and Peabody College with a degree in Speech Pathology. Later on, she would earn her master's at Middle Tennessee State University in Psychology. Diane enjoyed a 30-year career as a speech pathologist in the Maury County School system and loved being an advocate for her students. She had a true passion for this career and was filled with pride when she saw her students flourish into adults. It was amazing; she never forgot a single student and was always touched when someone would approach her and tell her how much she helped form them into the person they became. She had a tremendous passion for the three things: animals, Vanderbilt football, and the outdoors. She took in numerous stray dogs and cats and cared for them her entire life, including “Sally”, a half-wolf, half-German shepherd that was her companion for many of her later years. Diane also had a notorious green thumb; she could grow anything and was an avid gardener. Only half-joking, we all believed she could place a stick in the ground and a year later a beautiful plant would emerge. She was a huge Vanderbilt fan in both basketball and football. She loved going to the football games and cheering them on from the Vandy Stadium and even followed them to the Peach Bowl in 1974. She was fun-loving and enjoyed life to the fullest. Di, as she was lovingly known to everyone, was a wonderful mother and grandmother, and will be deeply missed. Diane is preceded in death by her parents, and husband, Garner Ivan Fink of Indianapolis. Diane is survived by her two daughters, Dana Holland-Beickert (Matt) of Germantown, TN, and Daye Eddy (Kyle), of Alpharetta, GA, and four grandchildren: Ryan and Courtney Eddy of Alpharetta, GA and Austin and Lauren Beickert of Germantown, Tennessee: two sisters: Joane Kibbons of Cookeville, Tennessee and Caryl Hunter (William) of Murfreesboro, Tennessee. Honorary pallbearers will be: Kyle Eddy, Ryan Eddy, Matt Beickert, Austin Beickert, Charles Kibbons III, and Christopher Kibbons. Diane will be interred at Woodlawn Memorial Park in Nashville, TN, where a graveside service has been planned for Friday, December 3, 2021, at 1:00 PM. Additionally, a visitation is planned at Williams Funeral Home on Friday, December 3, 2021, from 10 AM to 12 PM. Williams Funeral Home is assisting with all the arrangements. Condolences can be given to the family at www.williamsh.com In Lieu of flowers, donations can be made to the Maury County Animal Shelter, or the Alzheimer’s Association (www.alz.org)

Diane Benson Fink, age 86, passed away peacefully on November 28, 2021, at NHC Cool Springs in Franklin, Tennessee. Diane was born in Nashville, TN on January 13, 1935, to William Duncan and Ruby Gentry Benson. She and her two sisters grew up... View Obituary & Service Information

The family of Diane Benson Fink created this Life Tributes page to make it easy to share your memories.

Send flowers to the Fink family.