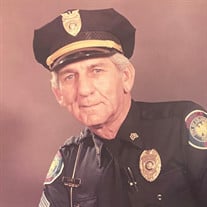 Donald “Don” W. Craft, 86, of Columbia, passed away Sunday, February 20, 2022 with his family by his side. Don was born February 17, 1936, to the late Mack and Celia Kimble Craft. He was a loving and devoted husband, father, grandfather, great-grandfather, and great-great-grandfather. Don married the love of his life, Faye Yarber, in 1954. They went on to have two children Patti in Louisville, KY and Garry in Florence, Alabama before settling down in Columbia, Tennessee to raise their family. Don was a faithful member of Highland Park Baptist Church since 1959. He had a long career in law enforcement retiring from the City of Columbia Police Department after 30 years as a Lieutenant in 1992. Don had a one-of-a-kind personality; he didn’t know a stranger. He had a great sense of humor and an even greater competitive attitude. He was a huge sports fan when it came to any sports, especially of the St. Louis Cardinals, Tennessee Titans, and the Vols. When Don wasn’t cheering on his favorite teams, he enjoyed many years coaching youth baseball and was a TSSAA umpire. He enjoyed visiting and relaxing on the beach, cruising on his lawnmower, or simply planting some new plants in his garden. Don took pride in his green thumb and would love to soak in the fruits of his labor. In addition to his parents, Don was preceded in death by his brothers, Paul and Mack Craft, and many other siblings. Those left to cherish Don’s memory are his loving wife of 67 years, Faye Craft; children, Patti Craft Abens (Jeff), Garry Craft (Melinda); grandchildren, Jennifer Knight (Chad), Bryan Butler (Bobbie) and Rebecca Craft Hixson (Rett); great-grandchildren, Blake, Chanlier and Gavin Knight, Bryce and Chloe Butler and Everett Layne Hixson IV; great-great-grandchildren, Addie and Reese Knight. All services are to be held privately. In lieu of flowers, memorial contributions may be made to Highland Park Baptist Church in honor of Don. The family extends their sincere gratitude to Dr. Lucy Ledbetter and the caring staff at NHC Maury Regional TCC, Compassus Hospice, and Wilson and Charlene Henderson for their endless compassion. To share memories and condolences with the family, please visit www.williamsfh.com. The care of Donald “Don” Craft and his family has been entrusted to the staff of Williams Funeral Home.

The family of Donald W. Craft created this Life Tributes page to make it easy to share your memories.

Send flowers to the Craft family.