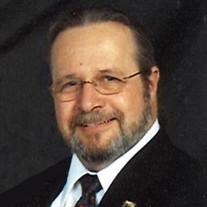 Donald Eugene McMasters, age 73, passed away at his home surrounded by family Monday, November 2, 2020. Don lived a life worthy of a feature film. He began life on February 15, 1947, losing both of his parents prior to his second birthday, and was raised by his grandmother in southern middle Tennessee. Upon graduating high school Don went into the United States Navy and faced the Vietnam War. Later Don would go on to work as an aircraft engineer with Northrop Aircraft, and one of his most interesting aeronautic achievements was that Don was apart of the Research and Development team for the B2 stealth bomber. The B2 became an integral aircraft in the United States. One of Don’s absolute favorite stories to tell from his time in the military was when he was stationed on the U.S.S. Princeton. While aboard the Princeton, they were tasked with recovering the Command Module of Apollo 10. Don aided in the smooth recovery of Col. Thomas P. Strafford, Commander Eugene A. Cernan, and Commander John W. Young, from the South Pacific Sea. Don’s mechanical inclinations were not limited to planes he also had a great love for automobiles particularly drag racing. He worked for many years building engines for drag racing of all types. One of his favorite places was Orange County Speedway where he spent endless hours listening to count downs and the inevitable roars of cars as they race to be first off of the line. Don also spent time working on street-legal vehicles as well. A source of great pride, Don purchased new a 1975 Chevy truck that he still owns and is in perfect condition. Don also spent time painting and building custom motorcycles, if it had a motor he could fix it. Don was a man of many talents and interests. In addition to his mechanical expertise, he was quite the leatherworker. Don had somewhat of a fascination with the old west. He worked toward developing skills in archery, bullwhip handling, handguns, and quick drawing. He would put on country-western acts alongside his son, where he would have newspaper held in his mouth whipped and cut in half, it was quite the thrilling act. He wasn’t just coordinated and gifted with his hands, Don could also cut a rug, and was a skilled country style dancer. He loved to take his wife Vivian line dancing. Don has always been a man that is almost larger than life. In addition to all of his incredible life journeys, he shared his beautiful life with his family all along the way, always with a dog at his side. They are his greatest joy and he loves them deeply, and his K-9 companion Toby. Don has counted down his final race…. The family will receive friends from 11:00 am until 1:00 pm Friday, November 6, 2020, at Williams Funeral Home in Columbia, TN. A memorial service celebrating Don’s life will be held following visitation at 1:00 pm with Bro. Bob Vassar officiating. Don is survived by his wife: Vivian King-McMasters; sons Donnie Gene McMasters, Danny Jay McMasters, and Nathan Robert McMasters; stepsons: Jason and Daryl Roberts; grandchildren: Chaz McMasters, Riley McMasters, Kalub McMasters. Aliyah McMasters, Aaliyah Roberts, Paxton Roberts, Bailey Roberts, Ella Roberts, Abby Brown, and John Brown. One of Don's last wishes was to be a full anatomical donor to benefit his fellow man one last time. Don requests any memorials be made in the form of donations to St. Jude’s Children’s Research Hospital. Williams Funeral Home is assisting the family with arrangements. Condolences can be given to the family online at www.williamsfh.com

Donald Eugene McMasters, age 73, passed away at his home surrounded by family Monday, November 2, 2020. Don lived a life worthy of a feature film. He began life on February 15, 1947, losing both of his parents prior to his second birthday,... View Obituary & Service Information

The family of Donald Eugene McMasters created this Life Tributes page to make it easy to share your memories.

Donald Eugene McMasters, age 73, passed away at his home surrounded...

Send flowers to the McMasters family.