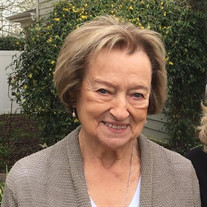 Dorene "Dody" Billingsley, age 89, a resident of Camellia Drive, passed from this life surrounded by her family on Monday, April 5, 2021 at NHC Maury. A celebration of her life will be Monday, April 12 at 2 pm at Williams Funeral Home. Family visitation will be from 12 noon until service time at 2 pm. Dorene Lawson Billingsley was born in Jackson, Tennessee on October 4, 1931 to parents Ruhl and Sue Lawson. She grew up in Paris and Jackson before moving to Columbia where she attended Central High School. Dody made friends quickly and was elected cheerleader. She soon met and fell in love with Leon, a football player. They married in June of 1951 and were married for 59 years. Dody was a homemaker most of her life but loved to volunteer. She was always a room mother, a member of the Jaycettes and a volunteer with the Maury Regional Medical Center Auxillary. She was the manager of the hospital gift shop for many years. She and Leon opened The Framecrafter Gallery after Leon retired from Monsanto in 1985. Dody worked in the office of Drs. Parey and Corbin from 1999 until 2006. She was a member of Graymere Church of Christ where she met many lifelong friends. Dody rarely met a stranger and could talk to anyone. She was a loving wife, mother, grandmother, and great grandmother. She was never happier than when she was with family. Survivors include her daughters, Debbie (Randy) Bratton, Karla (Dan)West, grandson Russ (Amber) Bratton, granddaughter Baylor West, great granddaughters Hannah Bratton and Emma Kate Bratton, and sister Nancy McDonald. In addition to her husband and parents, she is preceded in death by her sisters Frances Brown and Ginger Brodie. Serving as pallbearers will be Randy Bratton, Russ Bratton, Dan West, Johnny Madeya, George Schwind, Jim Matthews, Jerry Daniel and Kyle Daniel. Honorary pallbearers are John Madeya, Mary Daniel, Barbara Bishop, Ernestine and Ross Whitley, Cindy and Dana Clark, Vince Vinson, Dr. and Mrs. Stephen Parey, and Dr. and Mrs. Shaun Corbin. The family would like to thank those who care for her as her time came to an end, especially NHC Maury Transitional Care Center, Maury Regional Medical Center and Dr. Jeffery Mitchell. The family requests that in lieu of flowers, donations or memorials be made to a favorite charity.

Dorene "Dody" Billingsley, age 89, a resident of Camellia Drive, passed from this life surrounded by her family on Monday, April 5, 2021 at NHC Maury. A celebration of her life will be Monday, April 12 at 2 pm at Williams Funeral Home. Family... View Obituary & Service Information

The family of Dorene Lawson Billingsley created this Life Tributes page to make it easy to share your memories.

Send flowers to the Billingsley family.