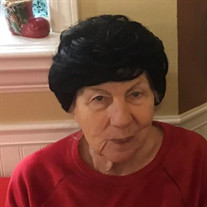 Doris Graham, age 91, passed away on February 22, 2022, in Columbia, Tennessee at Magnolia Health Care. Doris was born in Fulton, Illinois on August 2, 1930, to the late Joseph and Gertrude Kooi In the height of the depression. She was the second of 4 children. It was just her and Jean until they were teenagers and the younger 2 were born. Her only brother David is 14 years younger and then Ruth is the tail 2 years later. Doris not only was born during the depression, WWII started when she was 9 and lasted until she was 15. Her family was fortunate that her father worked on the railroad and was not drafted. She was a very good student. She graduated salutatorian of her high school class. But it wasn’t common for girls to go to college. She did go to cosmetology schools at some point. She also worked as a secretary. Doris met her husband Donald while they were in high school. Eventually, they went their separate ways but Donald came home and the “raven-haired beauty “caught his eye. They married and began a lifelong adventure. His job had them traveling the country, which she loved. They must have gone to about every state in the USA. They built a home in Texas in the late 60s as the homestead. Then in the 80s, they fell in love with Tn working at the Air Force base in Tullahoma. They bought the farm in Culleoka and never left. That is their final resting place. Doris is preceded in death by her parents; siblings: David Kooi, and Jean Mueller; and her daughter: Bonnie Rose Graham Worley; and her brother and sisters-in-law. Doris is survived by her grandchildren: Dawn Stosberg and Dwyn Worley III; stepsons: Donald Reddick and Berry Reddick; sister: Ruth Fernandes; greatgrandchildren: Aron (Heather) Stosberg, Gabrielle (DJ Porter) Stosberg, Deserae (Adam) Stosberg DeLaBruere, Ayden (Cassidy Dozier) Stosberg; Doris was fortunate to have lived long enough to see the beginnings of the next generation of her family. Josiah Avery Martinez (5) and Izekiel Vaughn Martinez (3). A graveside service for Doris will be held March 2, 2022, at 11:00 am at Cherokee Hill Cemetery in Culleoka, Tennessee with Ronnie Odom officiating.

Doris Graham, age 91, passed away on February 22, 2022, in Columbia, Tennessee at Magnolia Health Care. Doris was born in Fulton, Illinois on August 2, 1930, to the late Joseph and Gertrude Kooi In the height of the depression. She was the second... View Obituary & Service Information

The family of Doris Graham created this Life Tributes page to make it easy to share your memories.

Send flowers to the Graham family.