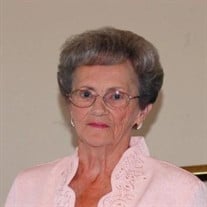 Dorothy Mae Garvin Stephens Paul, born January 30, 1937, in Hohenwald, TN to parents William Russell and Cora Elizabeth Garvin, passed away on February 18, 2022. She grew up in the Cross Bridges community and attended Cross Bridges school where she met her future husband, Milton Stephens. They were married on September 26, 1953, and have three children: Elaine (Billy) Wells, Johnnie Stephens, and Phyllis (Kenneth) Clark. Dorothy is a member of Viola Baptist Church and served in many of the Baptist churches in Maury Baptist Association. She faithfully taught children in Sunday School and Vacation Bible School, organized fundraisers for church projects as well as served in administrative roles within the churches. She loved to sing and was a member of quartets and trios as well as her own family’s vocal group. Dorothy was a remarkable cook and loved having large gatherings around her table to share in the bounty she prepared. She loved the outdoors and gardening. She worked hard and enjoyed sharing the overabundance of her produce with family and friends. Dorothy was an excellent seamstress, and no sewing project was too difficult for her to accomplish. She loved making quilts and hosted quilting bees in her home in earlier years. She was employed for many years by Weather Tamer and other garment factories in Columbia. In her later years, she worked in management for Dollar General. Along with her children, she leaves behind four grandchildren: Terrance Stephens, Connesuala Stephens Powers, Jessica (Nick) Collier, and John Robert Clark; six dearly loved great-grandchildren; her sister: Doris (Bill) Stewart; and brother: James (Barbara) Garvin. After 41 years of marriage, she was preceded in death by her husband: Milton Stephens in 1994. Dorothy was then married to Douglas “Buck” Paul in 2010, who also preceded her in death in 2014. Along with her parents, she was preceded in death by a brother: Hubert Garvin. Funeral Services will be held on Tuesday, February 22, 2022, at Williams Funeral Home in Columbia starting at 11:00 a.m. with Anthony Muston officiating. Visitation will be held on Monday, February 21, 2022, from 4:00 p.m. to 8:00 p.m. She will be laid to rest at Polk Memorial Gardens. Pallbearers will be: Bobby Garvin, Todd Haley, Nick Collier, (Nathaniel Jackson Gray ) John Robert Clark, Terrance Stephens, and Kenneth Clark. Williams Funeral Home is assisting the family with arrangements. Condolences can be given to the family online at www.williamsfh.com.

The family of Dorothy Mae Garvin Stephens Paul created this Life Tributes page to make it easy to share your memories.