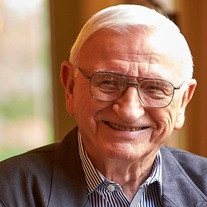 Dwight Truman Baptist, 96, passed peacefully in the Somerfield Center at The Heritage Brentwood. Dwight was born in Shelby County, Illinois, on August 20, 1924, to the late Ruth Bartlett Baptist and George Truman Baptist. He grew up in Shelbyville, IL with siblings, Elizabeth Lucille Baptist Speck, George Robert "Babe" Baptist, and Beverly Jean Baptist Monical Hays. As a coach and teacher at Cowden High School, Dwight fell in love with another teacher, the stunning Bette Jane Leckrone, who invited him into her home economics class to sample their baked goodies. They married in 1947 and raised their family of three children, Vicki, Eric, and Jody, cherishing their love and life together for more than 58 years. During WWII Dwight volunteered for the Navy and was selected to enter the V-12 program at Denison University, an opportunity that changed the course of his life. He transferred to the University of Virginia, where he went on to become starting guard on the basketball team. He would later be honored as the oldest living UV basketball alumni. Dwight was a true sports enthusiast, lettering in basketball, baseball, and track, going on to coach and later referee. In the early '50s with an expanding family, Dwight was teaching, coaching, and driving a Coke delivery truck at night, just to make ends meet. He saw an ad and joined the IRS, where he was sent to the University of Michigan for courses in both law and business. He would go on to earn the first-ever Masters Degree of Business Administration at Eastern Illinois University while working his way up the IRS ranks. In 1965 he transferred from Springfield, IL to become the Assistant Director for TN, based in Nashville. It was in the '60s that Dwight experienced two hallmark events. First, he was called to Washington, DC to lead a special task force charged with formulating qualifying criteria for employer benefit plans. After much time in isolation together, they emerged with the foundational standards that paved the way for rapid expansion and accessibility to such things as today's 401K's. Also in the early '60s, Dwight and a handful of others, met with Myrlie Evers, widow of civil rights activist Medgar Evers, in the basement of a Springfield church as she began her own activism, only two months after his assignation. In his later years, he still heralded the impact these two opportunities had on his life. In 1971, he accepted the Director position overseeing the IRS for the state of Alabama for nine years. He came out of retirement in the '80s, to become principal of a private school, K - 12. Relocating to Brentwood, TN in the summer of 1999, he and Bette were active at Brentwood United Methodist Church, the Wesley Forum, and Stephen's Ministry. When beloved wife Bette battled brain cancer in 2004-2005, Dwight was by her side, leading the fight, helping preserve her quality of life while extending it well beyond expectations. In 2011, he moved to the Heritage Brentwood, a senior living community he grew to love and cherish dearly, eventually serving as the President of the Residents' Council. Not one to sit idle, Dwight served on numerous boards at universities, foundations, churches, HOA's, and charities. A man of faith, Dwight would tell you his "calling" to volunteer service for prisoners at the Riverbend Maximum Security Complex, and playing "taps" at veteran funerals, were among the most meaningful. The recipient of many accolades, Dwight in his own words said, "life together with Bette, the struggles and successes and children and grandchildren were blessings far greater than any material items or championships or honors or promotions or awards." Survived in death by his children, Vicki Sue Baptist Meyer (Brad), Eric Baptist George (Mary), and Jody Kay Baptist Stautzenbach (Tom), nine grandchildren; Michael Boling (Jessica), Alicia (Stephen), Drew and Natalie Meyer, Gentry and KristinLyle George, Madison Johns, Carter Sharp, Mattie Stautzenbach and five great-grandchildren, along with beloved brother Babe, sister Beverly and eight cherished nieces and nephews. Preceded in death by his parents Ruth and George, and sister Elizabeth. In lieu of flowers, please consider donating to the Dwight & Bette (Leckrone) Baptist Scholarship at Eastern Illinois University (eiu.edu/giving.php). A private memorial service to celebrate Dwight's life will be held at a later date.

Dwight Truman Baptist, 96, passed peacefully in the Somerfield Center at The Heritage Brentwood. Dwight was born in Shelby County, Illinois, on August 20, 1924, to the late Ruth Bartlett Baptist and George Truman Baptist. He grew up in Shelbyville,... View Obituary & Service Information

The family of Dwight Truman Baptist created this Life Tributes page to make it easy to share your memories.

Send flowers to the Baptist family.