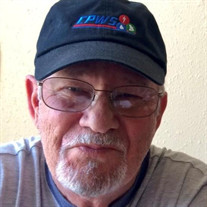 Edward A. Lyles, Jr., age 82, passed away Wednesday, January 19, 2022, in Columbia, Tennessee. Edward was born on May 31, 1939, to the late Edward Arnold Lyles, Sr., and Edna Hines Lyles in Cross Bridges, Tennessee. Edward married the love of his life, Dovie Jean Hammox, on June 15, 1963, and cherished 58 beautiful years together. They expanded their family by having a girl and a boy. Edward was a Supervisor with Union Carbide and even went to Puerto Rico to help establish their company. On his day-to-day, he would farm his cattle, spend time fishing or hunting, but what he really enjoyed was music. Country music brought him joy. He would sit and strum the strings of a guitar, banjo, and mandolin for countless hours. In his later years, he was a wonderful caregiver to his wife and enjoyed spending time with his family. He will be dearly missed. The family will receive family and friends on Saturday, January 22, 2022, from 11:00 AM to 1:00 PM at Williams Funeral Home in Columbia. The funeral service will commence at 1:00 PM with Bobby McCord officiating. To follow, Mr. Edward will be taken to his final resting place in the Garden of Matthew at Polk Memorial Gardens. American Legion Post-19 is rendering Military Honors. In addition to his parents, Edward is preceded in death by his sister, Josephine Lyles Waggoner. He is survived by his wife, Dovie Jean Lyles; children: Jennifer Gay (Jimi) Williams and Jason (Rachel) Lyles; grandchildren: Jaycie Lyles, Rhett Lyles, Christian Williams, Elijah Williams; and sister, Carolyn Myatt. The Lyles family would like to thank Dr. Richard Kennedy, the staff at Maury Regional Medical Center, Caris Hospice, and Morning Point Assisted Living for their compassionate and unrelenting care. Williams Funeral Home is assisting the family with arrangements. Condolences can be given to the family by visiting www.williamsfh.com.

The family of Edward A. Lyles Jr. created this Life Tributes page to make it easy to share your memories.

Send flowers to the Lyles family.