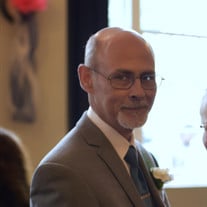 Eric Lee Puckett Sr., age 61, passed away on February 23, 2022 in his home surrounded by his family in Mt. Pleasant, Tennessee. Eric was born on March 4, 1960 to the late Maynard Puckett Sr. and Priscilla Puckett in Webster, Massachusetts. Those who knew Eric called him another MacGyver because he could fix just about anything. He worked at Swarco Industries for over 30 years and he was a valued employee. If his coworkers asked him for help, whether it was professional or personal, he was always willing to do what he could for others. If there was any problem that arose at work, talking to Eric was the way to go. Even though he was a quiet man, when he spoke everyone listened. Eric was a wonderful craftsman. He could make something out of nothing. Eric was a devoted Christian man. He was a member of Richland Baptist Church for over 20 years. He enjoyed reading the Bible and Bible Commentaries in his free time. Eric enjoyed talking to others and planting the seed of faith. He truly believed that faith could move mountains. Eric enjoyed fishing with his brother, Harry Puckett. Even though it wasn't often, it was a treasured time they spent together. Eric is survived by his loving and devoted wife: Donna Puckett; children: Eric Lee Puckett, Jr. (Molly), John Puckett (Shawna), Amanda Hargrove (Hunter); granddaughter: Blair Hargrove; siblings: Harry Puckett (Karen); brother-in-law: Donald Blankenship, Jr. (Nancy); nieces: Melinda Asbury (Luis), Priscilla Tibbs, Christina Bakken (Paul); nephews: Brandon Puckett (Kristen), Robert Blankenship (Marsha); several great nieces and nephews. Eric was preceded in death by his parents: brother: Maynard Puckett, Jr.; and sister: Wendy Tibbs (Bryan); brothers-in-law: David and Daniel Blankenship; niece: Brittney Blankenship; nephew: Matthew Tibbs. A memorial visitation will be held on Sunday, February 27, 2022, from 4:00 PM to 8:00 PM at Williams Funeral Home - Mt. Pleasant. The Puckett family would like to say a special thanks for all the messages, food, help, and prayers they have received. Williams Funeral Home is assisting the family with arrangements. Condolences can be given to the family at williamsfh.com

Eric Lee Puckett Sr., age 61, passed away on February 23, 2022 in his home surrounded by his family in Mt. Pleasant, Tennessee. Eric was born on March 4, 1960 to the late Maynard Puckett Sr. and Priscilla Puckett in Webster, Massachusetts.... View Obituary & Service Information

The family of Eric Lee Puckett Sr. created this Life Tributes page to make it easy to share your memories.

Send flowers to the Puckett family.