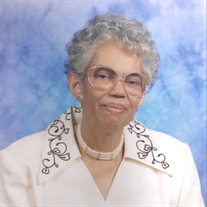 Mrs. Ernestine Cannon McGrone, age 93, a resident of Columbia, transitioned peacefully, on Friday, February 5, 2021 at home surrounded by family. She will lie in state 11:00 am – 1:00 pm on Tuesday, February 9, 2021 at Williams Funeral Home, Columbia, with the service following at 1:00 pm. Burial will be at Polk Memorial Gardens. Born on September 3, 1927, Ernestine was the daughter of the late Floyd and Sallie Cannon. She attended school in Maury County at College Hill High School and later moved to Evanston, Il. where she graduated from New Trier High School. She later relocated back to Columbia, TN. She was baptized in 1963 in the Jehovah’s Witness. She spent her years as a loving homemaker. Ernestine nurtured, loved, raised her children, grandchildren, and so many others. She is survived by her children: Lexine McGrone Davis, Renee McGrone, Venesser McGrone Davis, and Ricardo McGrone; 11 grandchildren, 10 great grandchildren, 9 great great grandchildren. In addition to her parents, she was preceded in death by husband, George McGrone Sr.; children: George McGrone Jr., Audrey McGrone, Xavier McGrone, Laverne McGrone; siblings: Rufus Cannon, Andrew Cannon, Goldie Cannon McCoy, Clarence Cannon, and Samuel Cannon. Williams Funeral Home is assisting the family with the arrangements. Condolences may be shared with the family at www.williamsfh.com. Funeral services will be streamed on-line at www.williamsfh.com. Face Masks and social distancing will be enforced.

The family of Ernestine Cannon McGrone created this Life Tributes page to make it easy to share your memories.

Send flowers to the McGrone family.