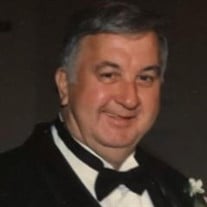 Gordon Monroe, 81 of Columbia, TN (formerly Culleoka, TN and Allen Park, MI) with his predeceased wife of 57 years, Saundra Monroe, passed away Tuesday, November 23, 2021. He was surrounded by his family and friends at the time of his passing. Gordon was born March 1, 1940, in Melvindale MI to the late Frank and Fannie (Neville) Monroe. He was also preceded in his death by brothers, Gene (Carolyn), Frank (Mary Ellen), and Buck, sisters Irene Donofrio (Julio), and Shirley Voss. He was a member of the First Baptist Church of Columbia TN and also enjoyed fellowship with his friends at Loyal Chapel Baptist Church. Gordon retired in 2001 from Ford Motor Company after 31-years of service as a Material Handler at the Woodhaven Stamping Plant where he was a proud UAW member. Those who knew Gordon were guaranteed the joke of the day or several. Until his last days, he commented on how important laughter is and the joy it brought him, seeing people chuckle. In addition to joke telling, he was an avid College Basketball Fan and perhaps the world’s largest University of Kentucky Wildcats fan. His roots in basketball ran deep as he was part of the 2008 Melvindale High School Hall of Fame Induction for the 1956-57 Varsity Basketball Team that had a Team Record of 16-4, Twin Valley League Champions, District and Regional Champions who also appeared in the State Quarter Finals. Gordon’s life verses included Proverbs 3:5-6 that he quoted daily and the ever-important John 3:16. In his last years, a favorite part of his day was his quiet time with the Lord, reading scripture, the Our Daily Bread, and other devotionals. He had a sweet walk with his Savior, Jesus Christ. A graveside service will be held for Gordon by Williams Funeral Home at Polk Memorial Gardens, 6465 Trotwood Ave, Columbia, TN on Saturday, November 27, 2021, at 1:00 PM with Pastor Steve Swango officiating. Gordon is survived by his Children, Kieth (Nancy) Monroe, Kenneth (Jackie) Monroe, Kirk (Correna) Monroe, Brad Monroe, and Meghan Monroe. In lieu of flowers, the family ask that you consider making a donation to American Cancer Society at https://donate3.cancer.org/. Pallbearers will be Gary White, Peyton Monroe, Landon Monroe, Brett Hall, and Brad Monroe. Honorary Pallbearers will be Dan Geb, Tom Halter, Matthew Monroe, Poplar Estates, and the 2012 University of Kentucky Men's Basketball National Championship Team. The family would like to extend their gratitude to Hospice Compassus of Columbia Tennessee for their kind and tender care.

Gordon Monroe, 81 of Columbia, TN (formerly Culleoka, TN and Allen Park, MI) with his predeceased wife of 57 years, Saundra Monroe, passed away Tuesday, November 23, 2021. He was surrounded by his family and friends at the time of his passing.... View Obituary & Service Information

The family of Gordon Monroe created this Life Tributes page to make it easy to share your memories.

Send flowers to the Monroe family.