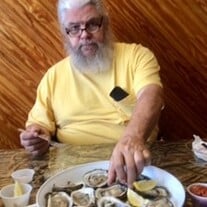 Harry Jamison Voss, Sr. age 73, passed away on March 26, 2021, at Maury Regional Medical Center in Columbia, TN. Since his retirement in 2010, Harry has been a resident of Lawrenceburg, TN, and was of the Pentecostal faith. He was preceded in death by his parents, William Seamon and Betty Martin Voss, and one brother, James William Voss. As a young man, Harry enlisted in the Navy, retiring after 22 years. Six months later, he began a second career as the Occupational Safety & Health Manager for the Department of Navy for the next 25 years. He devoted his life to serving our country for 47 years. Harry became a Lawrence County Master Gardener six years ago. He served as President and Vice President and due to his dedication and volunteer spirit, the Master Gardeners are dedicating a tree in his honor at the Hope Botanical Garden in Loretto, TN. Through the Master Gardener Program, he learned about beekeeping and became an avid beekeeper and mentor. He was a founding member of the Lawrence/Wayne Beekeepers Association, serving as Vice President for several years. Recently he became the South Middle Tennessee Regional Vice President for the Tennessee Beekeepers Association, visiting 12 local bee clubs, keeping them informed about the wonderful work this organization is accomplishing through dedicated volunteers. He is survived by his loving wife, Shelia McGuire Voss; four children: John (Wanda) Fowler of Atlanta, GA; Jennifer Dale of Columbus, OH; Marna Dale of New Orleans, LA; Jamie Simmons of Annapolis, MD; 10 Grandchildren and 8 Great Grandchildren. There will be a "Celebration of Life" in the near future. More information will follow later. Williams Funeral Home & Crematory is assisting the family with arrangements. You may send the family your sympathy or share your memories at williamsfh.com.

Harry Jamison Voss, Sr. age 73, passed away on March 26, 2021, at Maury Regional Medical Center in Columbia, TN. Since his retirement in 2010, Harry has been a resident of Lawrenceburg, TN, and was of the Pentecostal faith. He was preceded... View Obituary & Service Information

The family of Harry Voss created this Life Tributes page to make it easy to share your memories.

Send flowers to the Voss family.