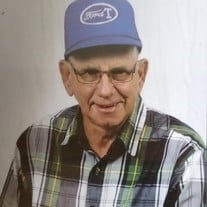 Hubert Lavon Garland, age 82, passed away on December 08, 2020, at Southern Tennessee Regional Health in Lawrenceburg, TN. Hubert was born on January 16, 1938, to his late parents George Leamon and Martha Louisa Cantrell Garland. Hubert was a Self Employed do-er, a jack of all trades. He Was a passionate farmer and mechanic. As many say, Hubert was a helluva mechanic, fixed anything and everything from the age of 10. He was a member of the Tennessee T's and the Lawrence County Car Club, where he got to know members in his community that shared the same passion as him. Hubert left a great legacy for all of his family and all the lives that he touched. Hubert is preceded in death by his parents; sisters: Willowdean Glover and Artie Tice; brothers: Earl, Wayne, Rufus, Ruben, Carl. Hubert is survived by his loving mate: Belvie Joyce Garland; children: Timothy Garland and Kathy Garland (Terry); step-children: Diane Hernandez, Barry Henson; grandchildren: Jared (Josie) Garland, Bryson Garland, Joshua (Angel) Graves, Ashley Graves, Lacey Hernandez (McCullen), Anthony Hernandez, Candi Hernandez, Cameron Hernandez, Bobbie Jo Hendez; great-grandchildren: Anthony Graves, Logan Graves, Jenny Graves, Alice Graves; brother: Robert Garland; sisters: Dale Self, and Nora (Ed) Matthews. Williams Funeral Home & Crematory is assisting the family with arrangements. You may send the family your sympathy or share your memories at williamsfh.com.

The family of Hubert Lavon Garland created this Life Tributes page to make it easy to share your memories.

Send flowers to the Garland family.