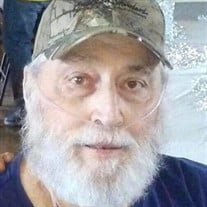 James Albert Odom, age 75, passed away on Saturday, March 26, 2022, at Nashville VA Hospital. James was born on February 24, 1947, in Mt. Pleasant, Tennessee to the late Jasper Odom and Mary Estelean Chapman Odom. James graduated high school in 1965 from Garden City East High in Garden City, Michigan. After high school, he joined the military and served his country for 4 years in Fort Leonard Wood in Missouri. On June 21, 1968, James married the love of his life, Rita Cothran. Together, they raised three wonderful children. After leaving the military he worked several different places as a Millwright/Welder to support and provide for his family. James enjoyed Western movies and Jerry Lee Lewis music. He also enjoyed camping when he was younger and went as often as he could. James also enjoyed supporting and cheering on his grandchildren and spending as much time as he possibly could with his family. James was a longtime and faithful member of the Mt. Zion Church of Christ. James is preceded in death by his parents: Jasper Odom and Mary Estelean Chapman Odom; and brother: Johnny Odom. James is survived by his loving and dedicated wife: Rita Odom; children: Shane Odom, Trent Odom, and Rhonda Clark (Charles Hodge); grandchildren: Trevor Odom (Abbie Kilburn); Shyann Clark, Lois Odom, and Arionna Clark; stepgrandson: Andrew Hodge; and great-grandson: James Waylon Odom. Pallbearers will be Trevor Odom, Timmy Kennedy, Ben Davis, Wayne Chapman, Thad Runions, and Jesse Lancaster. Honorary pallbearers will be past and present members of Mt. Zion Church of Christ, Dalton Cole, James “Mac” McFadden, Robin “Pete” Peterson, nieces, nephews, and cousins. The family would like to give a special thank you to the Nashville VA hospital and Life Care Center. The family will receive friends at Williams Funeral Home in Mt. Pleasant on March 31, 2022, from 4:00 PM to 8:00 PM. A service for James will be held April 1, 2022, at 2:00 PM at Williams Funeral Home in Mt. Pleasant with Terry Chapman officiating. James will be laid to rest at Arlington Cemetery in Mt. Pleasant. Williams Funeral Home is assisting the family with arrangements. Condolences can be given to the family at williamsfh.com

The family of James Albert Odom created this Life Tributes page to make it easy to share your memories.

Send flowers to the Odom family.