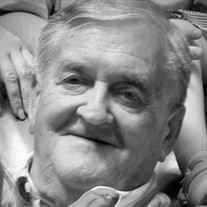 Joseph Wayne Laster, loving husband, proud father of two, and devoted Granddaddy to four precious grandchildren, died peacefully in his sleep, Saturday, July 10, 2021, at the age of 79. He was at home on his beloved farm in Belfast, Tennessee, surrounded by his family following a long illness of heart disease, diabetes and kidney failure. Joe’s last days on this Earth were a great physical challenge, but they gave him and those who loved him the blessing of time to reminisce, to make plans for the future and to declare unending love for one another. Joe met his parents, Everett Jackson (EJ) Laster and Mary Orman Scruggs Laster and his brother Haydden Jackson (Jack) Laster at Heaven’s Gate. So many other dear family and friends were there to welcome him to his eternal home. Joe’s first childhood home was in Isbell, Alabama. He graduated from Russellville High School in 1959. It was his time playing basketball and baseball there that began his love for sports. That continued his entire life, cheering for the Crimson Tide, rooting for the Tennessee Titans, and following his grandson, Lucas, through countless seasons of baseball in school and at Mississippi State. Cheering for Mississippi State as they won the recent College Baseball World Series will be a favorite memory for the whole family. Joe married his lifelong love, Martha Lucille (Lulu) Flippen Laster in 1963. They moved to Florence, AL, and attended the University of North Alabama. Joe studied business and then continued a career in purchasing and sales. That began at Reynolds Aluminum in Sheffield, AL, and continued for many years. He retired from Teledyne Wah Chang in Huntsville, AL. Along the way he enjoyed many entrepreneurial experiences. Joe hosted the first live cable television sales broadcast, Joe’s Swap Shop and opened the very first antique mall on Traylor Island in Huntsville. He was a lifelong collector of antiques and unique collectibles. Later in his career he traveled the country buying and selling tungsten and other precious metals for PM Metals in Belfast and Tungco in Kentucky. Joe was also a great auctioneer, working for Green Company and volunteering for several charity events. Joe is survived by the people on this Earth who mattered the most, his immediate and extended family, his wife of 58 years, Lou Laster, his son Everett Jackson Laster (Avery), his son Joseph Lyn Laster, his grandchildren, Lucas, Audrey Ann, Chandler, and Kennedy. Joe had a very large family of in-laws, nieces, nephews, and cousins who have been a joy to him throughout his life. The family wishes to thank the many medical professionals who have cared for Joe, especially the team at Caris Hospice for their kindness and expert care during his extended illness. His nurses and “detail team” were the best at making him happy and comfortable. They also want to thank the many family and friends who have offered such sincere condolences, recollections of wonderful memories, offers of love and support online, on the phone and in person. All these offers of love and kindness bless the family now and in the days to come. Joe loved his farm in Belfast, TN, and spent countless hours riding his tractor, gardening, and fishing in the pond. He cataloged his collectibles, hunted for deer, and delighted in watching his grandchildren play. His kitty cats, Smokey and Spot Nose were always by his side. In the last nine months, confined to his bed, Joe especially enjoyed two things to pass the time, western movies and gospel music. He said that the westerns reminded him of his younger, simpler days and took his mind on so many exciting adventures. The gospel music, especially Elvis singing his favorite hymns, reminded him of the time to come where there would surely be peace in The Valley for him. As the family gathered round his bed on his last night, it was those songs playing in the background and the love shared by each member of the family that sang him Home. A celebration of Joseph Wayne Laster and his wonderful life so well lived will be held on Sunday, August 8, 2021 at the Winston Home on the Campus of Deshler High School in Tuscumbia, AL. All of Joe’s family and friends are invited to come share memories and refreshments from 2:00 - 4:00. Williams Funeral Home is assisting with arrangements.

Joseph Wayne Laster, loving husband, proud father of two, and devoted Granddaddy to four precious grandchildren, died peacefully in his sleep, Saturday, July 10, 2021, at the age of 79. He was at home on his beloved farm in Belfast, Tennessee,... View Obituary & Service Information

The family of Joe W. Laster created this Life Tributes page to make it easy to share your memories.

Send flowers to the Laster family.