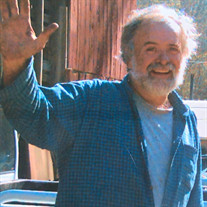 John Dawson "Danny" Holder, Sr. passed away on April 22nd, 2021, at his home in Lynnville, TN. Danny was born on June 17, 1948, at King's Daughters Hospital in Columbia, TN to the late James Edward (Dorothy) Holder and Annie Opal Woodard (Jack) Sparks. Danny dedicated many years working with CSX Railroad for over three decades until his retirement. Danny spent his later years farming and raising his cows on his land. He always kept himself busy working on any and everything that needed fixing. His family describes him as a very selfless man that provided for the needs of his loved ones. Danny adored his family and cherished his time with his grandbabies. Danny will be missed by many. The family will receive friends Tuesday, April 27th, 2021, from 12:30 PM to 3:00 PM. A service for Danny will follow in the chapel of Williams Funeral Home at 3:00 PM. Burial will follow at Polk Memorial Gardens. Pallbearers will be John Beard, David King, Josh Goldman, Clifford Brooks, Spencer Brooks, Joseph Brooks, and Zachary Taylor. Ray Brooks will be an honorary pallbearer. Danny is survived by his daughter, Anna Holder Beard; step-daughters: Rebecca Pangle and Connie Winters; grandchildren: Ashley Holder, Allison (Josh) Goldman, Mandy Beard, and John Beard; great-grandchildren, Kylee King and Madison Goldman; several step-grandchildren and step-great-grandchildren; and sister, Janice (Rusty) Nance. In addition to his parents, he is preceded in death by his first wife, Evelyn "Joyce" Holder; his second wife, Susan Holder; and his son, John Holder, Jr. Williams Funeral Home is assisting the family with arrangements. Condolences can be given to the family by visiting www.williamsfh.com.

The family of John Dawson Holder, Sr. created this Life Tributes page to make it easy to share your memories.