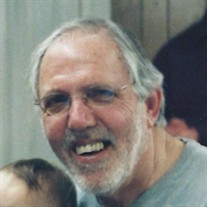 John Williams Shrader, age 72, passed away on Thursday, October 21st, 2021 in Summertown, Tennessee. John was born on March 24, 1949, to the late Frank Gilbert and Ruby Lee Shrader in Lawrenceburg, Tennessee. John married the love of his life, Joan Plunkett, on December 5th, 1977. Shortly after they expanded their family by having a girl and two boys. As their children grew up and had their own children, it doubled their family in size. Overjoying John with the precious gift of his grandchildren. John is a generous and selfless man. He looked out for his family and made sure they never went without. Family is the number one thing in life that he cherished the most. John spent most of his life working as a truck driver for Sharp Transport for over 20 years until his health led him to spend more time at home and with his family. You could always find John cheering on the Kentucky Wildcats basketball team and the New York Yankees baseball team. When he’s outdoors you’ll find him enjoying the scenery, shooting his guns out on their beautiful property, and riding on his Harleys. A memorial service for Mr. John will be held Monday, October 25th, 2021 at 6:00 PM with three hours of visitation prior at The Tabernacle in Summertown. John is survived by his loving wife, Joann Shrader; daughter: Deidrea (Jason) Robbins; sons: Rick Shrader and Michael (Kimberly) Shrader; grandchildren: Jansen Robbins, Dakota Robbins, Hunter Robbins, Rebecka Robbins, Weston Robbins, Hailey “Juice” Shrader, Matt Shrader, Addyson Shrader, Jonathan Shrader, Joshua Shrader, and Emily Shrader. Williams Funeral Home is assisting the family with arrangements. Condolences can be given to the family by visiting www.williamsfh.com.

The family of John William Shrader created this Life Tributes page to make it easy to share your memories.

Send flowers to the Shrader family.