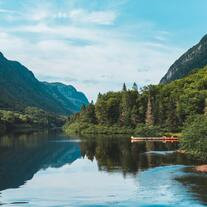 Joseph Baird Dunn, age 97, passed away on March 10, 2021, at Traditions of Spring Hill in Spring Hill, TN. Joseph was born on December 26, 1923, in Columbus, OH to parents Fred and Helen Baird Dunn. Joe grew up in Columbus, attending Yale University, and enlisted in the Navy on December 10, 1942. He was honorably discharged as a Seaman 1st Class on April 11, 1946. Joe worked for Jefferey Mining Corp for 42 years from 1947-1989. A good part of his career with Jefferey Mining was spent living and working in Morristown, TN. Joe loved the outdoors. Being in East Tennessee, Joe would often take his family to the nearby Great Smoky Mountains National Park to hike. Even at the robust age of 92, he was still hiking. The weekends were also spent with family at the local put-put, honing his golf skills. With his middle name being "Baird" (his mother's maiden name), Joe was fondly referred to as "Joe Bear" by his family and friends. It wasn't until later in life that he questioned why people called him Joe Bear rather than his correct name of Baird with emphasis on the "d". While in Columbus, Joe and his wife, Grace, lived near the Ohio State University campus, where they loved their neighbors. If you didn't find Joe at home reading about the founding fathers, early American history, or the Civil War, he was probably at the nearby Barnes & Noble bookstore where he enjoyed reading the paper, drinking coffee, and talking with friends. One of the first things Joe did when he retired was become a Volunteer at the Ohio Historical Center (OHC) sorting through archeological artifacts. At one point he held the honor of being OHC's longest-running volunteers from 1989-2016. Joe always had a great sense of humor. He was notorious for spilling his coffee. After spilling a cup of coffee during a volunteer session at OHC, the others would often remark that when someone spills a drink, they did a "Joe". Joe married Grace Peck of Watertown, CT on November 22, 1950. Joe and Grace were married for nearly 62 years until her passing on September 6, 2012. Joe is also preceded in death by his son Andrew, who passed on August 19, 2007. After 97 years on this earth, Joe leaves behind his daughter, Ann Maxfield (Gregg), and son, Kenneth Dunn (Colletta); and two granddaughters; and two great-grandchildren. Williams Funeral Home & Crematory is assisting the family with arrangements. You may send the family your sympathy or share your memories at williamsfh.com.

The family of Joseph Baird Dunn created this Life Tributes page to make it easy to share your memories.

Send flowers to the Dunn family.