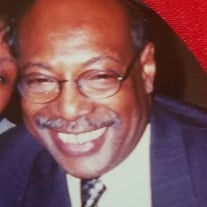 Larry Anthony Baker, age 65, passed away on December 18, 2020, in Nashville, TN. Larry was born on May 22, 1955, in Nashville, TN to his late parents Charles and Johnnie Mae Glenn Baker-Sanders. He attended Davidson County Public Schools and graduated from McGavock High School in 1973. Larry confessed his faith at an early age and was encouraged to become an Usher at Mt. Pisgah Baptist Church in South Nashville by his late Grandmother, Charlotte Glenn. He remained an Usher at First Baptist Church Capitol-Hill until his health deterred his commitment to his faithful duties. He later received his Apprenticeship License as a Pipefitter in 1977. Working various jobs with TVA, Perrelli, and more. Larry decided to adventure into HVAC, where he retired from Tennessee State University. He also established his own business and believed in helping others with fair prices. Larry had impeccable tastes in the latest styles of clothing, colognes, and cars. He always wanted the best of everything in life. He traveled to London and the Bahamas. He loved scuba-diving. Larry was a quiet and peaceful man, who loved his wife and family. He enjoyed being at home watching old westerns and Marvel movies while sipping on a good glass of whiskey; and listening to Motown music. Larry was my Clark Kent, my Superman, and my Spiderman. Larry is preceded in death by his parents Charles Baker and Johnnie Mae Glenn Baker-Sanders, and brother Vincent Leon Baker. Larry is survived by his loving and devoted wife of nearly 24 years, Albertine Baker; three daughters: Tamika Baker, Erica Jones, and Honey Simmons; several grandchildren; two siblings: Angela (Billy) Brown, Orange Park, Fl., and Michael (Dr. Cheryl-Presley) Baker, Hudson, MA.; several uncles and aunts, several nieces and nephews and a devoted niece, Gwendolyn Baker, San Diego, CA., a devoted cousin/brother, ThomasHebb, Magnolia, MA, and Delores Smith and family, Palo Alto, CA.; as well as many relatives, friends, and neighbors who will truly miss Larry. Williams Funeral Home & Crematory is assisting the family with arrangements. You may send the family your sympathy or share your memories at williamsfh.com.

The family of Larry Anthony Baker created this Life Tributes page to make it easy to share your memories.

Send flowers to the Baker family.