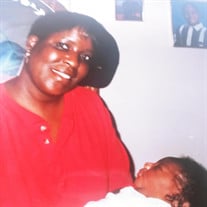 Lawanda McAllister (Porter) was born April 24, 1956, to Isaiah and Thelma Porter. She was the sixth child and first daughter to the union. Lawanda attended Detroit Public Schools and graduated from Finney High School in 1974. While attending Finney, she met by “chance” Gary McAllister. On August 8th of 1975, they secured a lifetime bond with one another. From that union, they created two sons Gary Jr. in 1976 and Baroque without missing a beat in 1977. Lawanda accepted employment at General Motors at the Clark Street plant in the summer of 1985. She took great pride in her job and her autograph is on display at the Detroit Historical Museum in the Automotive exhibit. When given the opportunity to transfer to the new Saturn/GM plant in Spring Hill, TN., Lawanda took full advantage of the opportunity with hopes of providing a better life for her family. In the Fall of 1990, Gary and Lawanda relocated their family to Columbia, TN for a fresh start. Lawanda worked for over 20 years with General Motors before deciding to embark on the next chapter of her life as a foster parent with her loving husband. She was always devoted to uplifting others and ensuring that children no matter what race or background received an opportunity to succeed in life. During this time they opened their home to over 50 foster children. I know you all say “Oh God” that’s right without her strong faith and relationship with her Lord this task would not be possible. But because of her faith and obedience, it was and much more. Lawanda and Gary then decided to adopt. The first being her third son William Gregory McAllister who at the time was a mere 3 days old. At this point, she had an amazing new glow and an even more defined purpose. She had even affectionately identified him as “My Will” which on a deeper level he was just that. In 2011, Lawanda and Gary took it a couple of steps further and adopted 3 more children Kenneth Touchstone McAllister, Kennedy Touchstone McAllister, and Jayden Touchstone McAllister. She spent much of her time making sure that they all had a great quality of life and just let “kids be kids”. She did just that and protected them as much as a loving mother could. As she encouraged them to excel in academics and sports, she also made it a priority for them to develop a relationship with God. You could miss 2 days of school, but you better be up Sunday morning. She would often say when asked by her children or other loved ones for advice she would respond “What does the Word say” or “Pray about it”. On September 11, 2021, Lawanda made her transition. Lawanda was proceeded in death by her parents, Isaiah and Thelma (Ramsey) Porter, siblings Jinx (Arnold), Michael Porter, Gregory Porter, and Gloria Porter. She leaves behind her husband Gary McAllister and siblings Isaiah Porter, Clifford Porter, and Herbert Porter. She also leaves behind six children Gary(Veronica), Baroque, Kenneth, Kennedy, Jayden, and William along with dozens of others who called her “Mom” or “Mrs. Wanda” Lawanda, A name that brings to mind beauty, understanding, and truth. Happiness – a word that expresses my time on Earth with you. Gary – a person whose life you have brightened beyond my wildest dreams. To you “Wanda” may love, truth and happiness be yours eternally. Hope – a word deserving my aspirations for “us” For we shall overcome the unforeseen – together. Words – sounds spoken that could never explain, nor express the love, truth, and understanding we- us- me-you – them and the world will find “us” Together Gary Sr. Summer of 1974

Lawanda McAllister (Porter) was born April 24, 1956, to Isaiah and Thelma Porter. She was the sixth child and first daughter to the union. Lawanda attended Detroit Public Schools and graduated from Finney High School in 1974. While attending... View Obituary & Service Information

The family of Lawanda McAllister created this Life Tributes page to make it easy to share your memories.

Send flowers to the McAllister family.