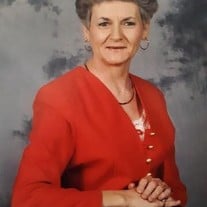 Linda M. Gray, 77, gained her wings on Friday, November 20, 2020 in Smyrna, Tn. She was born in Blytheville, Ark., the family moved to Rockford, Ill., were she met her ex-husband, Herbert E. Gray. Herbert & Linda had 4 children; Robert E. (Mary) Gray, of Owensboro, Ky., Michael L. Gray of Cadiz, Ky., Jennifer L. (Greg) Richards of West Dundee, Ill., and Jason K. (Michael) Gray of Nashville, Tn. Linda is also survived by 11 Grandchildren; Autumn Gray, Stephanie Gray, Bobby Gray Jr., Alex Gray, Jennifer E. Gray, SuAnn Gray, Laura Gray, Mandy Birdsong-Gonzalez, Roger Puckett II, Brandon Richards, and Landon Richards and many Great-Grandchildren. Linda is predeceased by; Two Grandchildren, Sasha Adams & Levi Richards; Her Mother, Opal King; Her Father: James King; 4 Siblings; Karen "Jean" Osborne, James "Junior" King, Kathy King, and Tom King. Linda started her life young in Rockford, Ill. Meeting Herbert there. Soon after they married, Bob was born. A few years later, they welcomed Mike. A few years after that they moved to Cadiz, Kentucky, and in May of '62, Jenny was born. It wasn't until April of 1977 that their "surprise" came, in the form of Jason. While he may have been a surprise, it was always surprises when it came to Jason. In 1988, Linda & Jason moved to Alabama and started over, after she divorced Herbert. Linda wanted to be closer to her favorite sister, Jean. Linda & Jean could always be seen around Russellville, Littleville, Belgreen, and Muscle Shoals, "doing their thing". Everyone who knew the two of them together knew they were always up to some sort of mischief. While Jason was growing into his teens. For many years Linda worked for HD Lee Company in Russellville, until she retired. Before Lee Company, she worked at Elk Brand in Cadiz, Ky. Linda was an avid seamstress. She was your "go-to" for fixing hems, pockets, pillows, shams, and so much more. She was also a great cook. Known for her "Sweets & Treats", Home Made Chicken and Dumplings, and Chili. Just to name a few. Linda also enjoyed spending time with her special friend, William "Troy" Holden. Troy and Linda could be seen, in Troy's Tow Truck, keeping the roads hot all over Alabama, Day and Night!! The last few years, Linda's health deteriorated and she moved in with Jason and his husband, Michael. As always, Linda brought life and sunshine into the home the 3 shared. Linda & Jason could be found in the kitchen cooking something sweet for Linda, or making Chicken & Dumplings. Linda also fell in love with Jason's Cats; Salem, Greyson, Sampson, and Fiona. She would spend hours "helping" with them and affectionately referred to them as her Grand-Cats, along with her Grand-Dog Jinx, who is her daughter Jenny's animal. Linda stayed at Jason's house as long as it was medically possible. However, she had to transition to a Memory Care Facility. With frequent, sometimes daily visits from the kids, Linda was always happy to see everyone, enjoying ice cream and fond memories on their visits. Because of the on going Covid-19 Pandemic, there WILL be a memorial. However, it WILL be at a later time. Williams Funeral Home is assisting the family with arrangements. Condolences can be given to the family online at www.williamsfh.com.

The family of Linda Merle Gray created this Life Tributes page to make it easy to share your memories.

Send flowers to the Gray family.