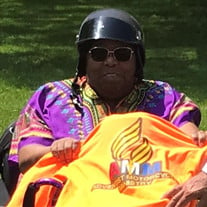 Loretta Eileen Hurt was born August 12, 1947, in Kansas City, Missouri to the union of Leroy Jr. and Grace (Morrow) Young. Loretta passed away November 24, 2020. She was preceded in death by her husband, Michael Hurt, father, Leroy Young, Jr., mother, Grace (Young) Burnett and stepfather, Robert Burnett. As a young person Loretta attended the Community Progressive Baptist Church and later the Beacon Light Seventh Day Adventist Church. She most recently was a member of the Maranatha Seventh Day Adventist Church in Columbia, Tennessee. She and her daughter often supplied tasty dishes for the church members. Loretta attended school in Kansas City, Missouri graduating from Central High School's class of 1965. From her youth Loretta was an avid reader spending hours engrossed in books, and often had a bag of candy to keep her company while reading. She was also quite the music lover, impressing those who heard her as she sang along to songs from a vast array of genres. Although she was like a second mother to the younger cousins and tolerated no nonsense, she was one for having fun. She'd often pile them into her car and take them to fun events. Loretta was a United States Army veteran. In 1972 she married Frank Tucker, who was in the Air Force. She spent time in Germany while he was stationed there. To that union, shortly after returning to Kansas City, their daughter, Angelique (lovingly called "Angel" by her maternal grandmother) was born. Loretta bowled on a team with her mother. They participated in bowling league competitions locally and abroad, amassing an impressive collection of trophies. In 1979 Loretta married Michael Hurt and shortly afterward they welcomed the birth of their son, William. The family moved to Denver, Colorado and their home was always open to visiting family and friends. Loretta had a long career with the IRS and traveled throughout the United States. Her most recent residence was in Spring Hill, Tennessee where she shared a home with her daughter and their pets. Loretta is survived by her children, Angelique Tucker and William Hurt, her brother, Steven Young and his wife, Cynthia, nephew and niece, Steven and Monyett Young, father, Leroy Young, Jr., her sister, Sylvia Moses, her brother, James Young, her sister Carolyn Young, and a host of cousins, other relatives and friends.

The family of Loretta Hurt created this Life Tributes page to make it easy to share your memories.

Send flowers to the Hurt family.