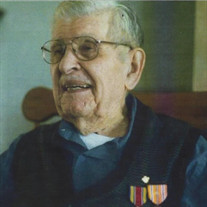 Lyman Laurel Gammon, age 98, resident of Columbia, entered into heaven on February 19, 2022, at his home surrounded by family. A celebration of life service will be held on Friday, February 25, 2022, at 1:00 p.m. with visitation an hour prior to the service at Pleasant Heights Baptist Church with Brother Bob Vassar and Pastor Maurice Hollingsworth officiating. Lyman will be laid to rest with full military honors at Polk Memorial Mausoleum immediately following the service. Lyman was born on September 14, 1923, in Keota, Iowa to the late Neil and Pearl Ramge Gammon. Lyman was a World War II Navy Veteran, having served his country proudly as a radar operator, aboard the Sub Chaser SC 505 in the South Pacific. He married the love of his life, Mary Lou, in 1943 and they raised their four children in Granada Hills, California, in a home he built with his father-in-law. Lyman retired from General Motors in Van Nuys, California after working there for over 30 years. As a devoted Christian, he was a member of Pleasant Heights Baptist Church and was always willing to help others. His sense of humor was loved by all. Lyman is survived by his children: Nancy Gammon, Gerrie Gammon, Christine Michals, Brad Gammon; grandchildren: Tiffany (Alan) Romine, Taylor Michals, Luke Gammon, Matthew Gammon; great-grandchildren: Morgan Wood and Chloe Romine; nieces and nephews, many great-nieces and nephews, and great-great nieces and nephews. In addition to his parents, he was preceded in death by his loving wife of 71 years, Mary Lou; his brothers: Howard Gammon and Bud Gammon; sister: Phyllis Gammon Selser; granddaughter: Natalie Wolf; and his beloved dog: Sally. Pallbearers will be Brad Gammon, Taylor Michals, Matthew Gammon, Alan Romine, Jeremy Alsup, and Wayne Phillips. Honorary pallbearers will be members of Pleasant Heights Baptist Church. In lieu of flowers, the family requests donations be made to the Wounded Warrior Project or Tunnel to Towers Foundation. Williams Funeral Home is assisting the family with arrangements. Condolences can be given to the family online at www.williamsfh.com.

Lyman Laurel Gammon, age 98, resident of Columbia, entered into heaven on February 19, 2022, at his home surrounded by family. A celebration of life service will be held on Friday, February 25, 2022, at 1:00 p.m. with visitation an hour prior... View Obituary & Service Information

The family of Lyman Laurel Gammon created this Life Tributes page to make it easy to share your memories.

Send flowers to the Gammon family.