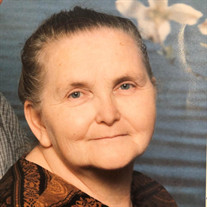 Lynda Dyer Clemons, age 75, went to rest on September 22, 2021, at Horizon Medical Center in Dickson, Tennessee. Lynda was born in Linton, Indiana on January 16, 1946, to the late Edward and Emma “Alman” Dyer. Lynda was a devoted wife, mother, and grandmother. She served her family in every way imaginable. She was especially devoted to her late husband Ed. She and Ed eloped when he was 16 and she was 18. Once they were married, they never went without one another. Wherever Lynda went, Ed went with her. They shared every experience they could together. When they were helping to build a church down in Columbia, they shared a sandwich and a banana. Everything in Lynda’s marriage to Ed was “100/100”. She always said, “You can’t do a marriage at 50/50 it had to be 100/100”. Her loving and motherly care carried over not only to her children but to everyone. She never liked the word daughter-in-law but her daughters. Lynda was known for stellar cooking. She was known for cooking people’s favorite food. During the holidays, her family would “fight" to get the first plate of food, especially her stuffing. Lynda was a godly woman. She rarely missed a Sunday service. As sweet as she was, she never let her children get away with anything but never let them forget how much she loved them. She cherished her grandkids and spoiled them. Lynda was known to be “the little woman with the bun on top of her head.” She was so small that her son had to get her a booster seat to see the road when she would drive. Lynda was preceded in death by her parents, loving husband: Junior Edward Clemons; Children: Jean Anne, Terry, and Paul Clemons; and grandson: Landon Clemons. Lynda is survived by her children: Peter Clemons (Lynn), David Clemons (Laura), Jerry Clemons, and Marsha Clemons; Daughter-in-law: Kacey Clemons; 14 grandchildren and 3 greatgrandchildren. A service will be held Monday, September 27, 2021, at 2:00 at Williams Funeral Home in Columbia, Tennessee with Harvey Moore officiating. The family will receive friends from noon to the start of the service. Burial will follow at Old Well Cemetery in Duck River, Tennessee. Williams Funeral Home is assisting the family with arrangements. Condolences can be made to the family at williamsfh.com

The family of Lynda Clemons created this Life Tributes page to make it easy to share your memories.

Send flowers to the Clemons family.