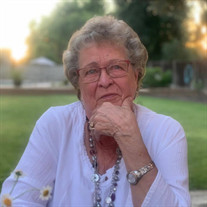 The Baker family has lost a beloved mother, Marlene Kay Baker, aka Gigi, who was born to George and Viola Kuehl in Lake Park, IA, on 3/08/1938, and passed away on 08/06/2021 while vacationing in Columbia,TN. Marlene married Merle Baker on August 6, 1954, and they raised five children in Spirit Lake, Iowa: Craig, Roxanne, Tammy, Candy, and Poncho. Marlene and Merle moved to Phoenix, AZ, in 1985. Marlene was preceded in death by her parents George and Viola Kuehl and her husband Merle Baker. Marlene joined Merle in heaven on what would have been their 67th anniversary. Along with her five children, eight grandchildren, and seven great-grandchildren, she is survived by her older brother Robert Kuehl and his wife Doris; younger brother Ronald Kuehl; and many nieces, nephews, and cousins. Marlene's five children were truly blessed to have such wonderful parents and the memories of both Marlene and Merle will live on through their grandchildren: Miranda (Trent) Ames, Megan Trent, Brandon Trent, Abby (Baker) Matheson, Shannon Baker, Brianna (Baker) Davis, Alyssa Baker, and Hayden Baker together with great-grandchildren: Lily Trent, Ava and Conner Matheson, Waylon and Liberty Ames, Sam Davis, and Huxley Baker. In addition to the children above, the immediate family includes Craig’s wife Lisa Baker Dreeszen, Tammy’s husband Terry Smiley, Candy’s husband Dan Jellum, Poncho's wife Karim (Kong) Baker, Miranda's husband Shaun Ames, Abby’s fiancée Andy Ebeling, Shannon's girlfriend Tayler Roads, Brianna’s husband Keegan McBride Davis, Hayden’s fiancée Kayla Hill, and Lily's boyfriend Jason Evans. Marlene dedicated her life to serving others and she loved to entertain. She brought us together as often as she could to celebrate the joy of “family". That was her gift to us. These trips included the beaches in Rocky Point, Mexico (Gigi’s favorite); crabbing in the Columbia river in Astoria, Oregon; the Great Smokey Mountains in Tennessee; houseboat trips on Lake Powell in Arizona; California adventures, including the recent wedding of her granddaughter, Brianna, in Fresno; and of course trips to Okoboji to see family and friends. Gigi’s presence will loom large at the next family gathering in July 2022 when one-year-olds Sam and Huxley will meet for the first time and Abby will marry her fiancée Andy. Gigi’s passion was her family and she told everyone that she had five great kids. She would remind us that you are not here for a long time, you are here for a good time. A whiskey and water usually followed. In her later years, Gigi loved to start her conversation with “Let me tell you one thing" - and a life lesson followed. She could do everything - sewing, reupholstering, electrical, plumbing, carpentry, cooking, baking, canning, arts and crafts. The list was endless and she was active up until she passed away. Her motto in life was simple – try hard and be your best at whatever you choose to do. Never give up, never give in and never surrender. Gigi didn’t just touch her immediate family, she was a friend, counselor and “mom” to many high school kids while working at the Spirit Lake High School. Friends still remind us of the times they heard Mrs. Baker say – report to the Principal’s office, now! Upon learning of her death, countless old friends reached out saying how much Mrs. Baker meant to them and that she was in many ways, their mom too. The Baker family thanks everyone - from Iowa to Arizona, from Fresno to Tennessee, and those around the country - for all of your comments, stories, flowers, and prayers. All of you were special to her and she called you "family." We truly believe that Gigi did not realize how many people's lives she touched during her lifetime. A celebration of life for our Gigi with be held in July 2022 in Spirit Lake, Iowa, when she will be buried with her childhood sweetheart and husband in the Spirit Lake Memorial Gardens. Please share a memory at www.williamsfh.com/m/obituaries.

The Baker family has lost a beloved mother, Marlene Kay Baker, aka Gigi, who was born to George and Viola Kuehl in Lake Park, IA, on 3/08/1938, and passed away on 08/06/2021 while vacationing in Columbia,TN. Marlene married Merle Baker on August... View Obituary & Service Information

The family of Marlene Baker created this Life Tributes page to make it easy to share your memories.

Send flowers to the Baker family.