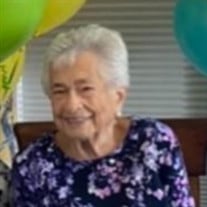 Martha L. Cathey, age 88, went to be with the Lord on Saturday, April 2, 2022, in Murfreesboro, Tennessee. Martha was born in the late Historic King’s Daughters’ Hospital in Columbia, Tennessee on September 26, 1933, to the late Phelps A. Lovell and Brownie Mae Lamar Lovell. After graduating High School, Martha wanted to propel herself into the business world and decided to take the opportunity to attend business school. She established a lifelong career with Tennessee Farmers Mutual Insurance Company, starting in the Claims Department to earning the position of Secretary to the Treasurer. She later retired after dedicating 42 hardworking years to the company. She was a long-time faithful member of West End Baptist Church. She was the devoted wife of Roy Cathey, whom she cherished for almost 70 years of matrimony until his passing in May of 2021. Of the many things the family will have left to treasure of Martha, they will revere her collection of over four hundred cookbooks from around the world from the times Martha and Roy would run away together to different corners of the earth, from Australia to Ireland, and hand-select each cookbook. She was always cooking and baking for friends and family and would crochet little gifts for her friends. She loved to spark joy in others no matter how she did it. The family still reaps the fruits of her labor of the gorgeous gardens that she tended to over the years. Those left to cherish her memory will be her children: Ken (Connie) Cathey and Dawn (Tim) Crunk; grandchildren: Nicholas (Adrienne) Cathey, Rebecca (Tyler) Cordell, Tim (Jaime) Crunk, Jr., Katie (Jason) McGuire, Corey Crunk, and Ian Crunk; and five beautiful great-grandchildren, plus a little one on the way. The family will receive friends at Williams Funeral Home in Columbia on Thursday, April 7, 2022, at 10:00 AM, with a funeral service to follow at 11:00 AM. Ms. Martha will be laid to rest at Polk Memorial Gardens. Pallbearers will be Scott Burt, Jerry Cook, Nick Cathey, Tyler Cordell, Corey Crunk, Ian Crunk, and Tim Crunk, Jr. Williams Funeral Home is assisting the family with arrangements. Condolences and words of healing can be shared with the family at www.williamsfh.com.

The family of Martha Lee Cathey created this Life Tributes page to make it easy to share your memories.

Send flowers to the Cathey family.