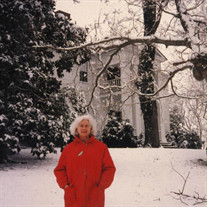 Martha Smith Jackson, 78, died on November 10, 2021, at her home, Vine Hill, near Cross Bridges. She was born in Columbia on October 18, 1943, and was the daughter of the late Louise Holt Smith and Sam Hugh Smith. She was descended from many early settlers of Maury County, including the Love, Voss, and Delk families. Martha grew up on a farm on Rippey Lake Road, one of eight children. In 1961, she graduated from Hay Long High School in Mt. Pleasant, where she was an All-District basketball player and excelled academically. Martha attended Middle Tennessee State College (now MTSU), and she was married on August 30, 1963, to Randolph Scott “Randy” Jackson, her loving husband of 58 years, who survives her. Martha and Randy lived in Houston, Texas for many years, during which time she had a successful career as a bank officer, including as Vice President of Clear Lake National Bank. For the past 30 years, she devoted much of her time and boundless energy to her historic antebellum home, which she filled with the beautiful things she was so good at finding. She loved country life, was a superb cook, and was immensely proud of the accomplishments of her sons, Randolph Scott Jackson, Jr. (Beth) of Columbia and Gregory Brian Smith Jackson (Roger Moore) of Nashville and Sewanee, who survive her. She delighted in telling people that they were “both lawyers.” Martha is also survived by her grandsons Randolph Scott “Rand” Jackson III of Austin, Texas, Montgomery Smith Jackson of Nashville, and Miles Cary Jackson of West Hollywood, California; her twin sister Shirley Smith of Columbia; and her brother Wayne Smith of Mt. Pleasant and Panama City, Florida. Martha is predeceased by her siblings, Dorothy Smith Hines, Catherine Smith McBride, J.L. Smith, Carolyn Smith Sisk, and Billy Smith. The family wishes to express its heartfelt appreciation to her caregivers, especially Christie Pillow, who was a loving friend and companion. The family will receive visitors on Saturday, November 13th from 10:00 a.m. to 11:45 a.m. at Williams Funeral Home in Columbia. Graveside service will follow at Polk Memorial Gardens. Pallbearers are Mark Hines, Miles Jackson, Montgomery Jackson, Rand Jackson, Zachary Sisk, Tim Smith, and Tony Smith.

Martha Smith Jackson, 78, died on November 10, 2021, at her home, Vine Hill, near Cross Bridges. She was born in Columbia on October 18, 1943, and was the daughter of the late Louise Holt Smith and Sam Hugh Smith. She was descended from many... View Obituary & Service Information

The family of Martha Smith Jackson created this Life Tributes page to make it easy to share your memories.

Send flowers to the Jackson family.