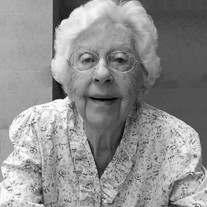 Mary Haynes Farris Lynch, 98, passed peacefully October 31, 2020 in Nashville. The daughter of Willis M. Farris, Jr. and Mary Brandon Haynes Farris, she was born at home on Richland Ave, Nashville on June 7, 1922. At age 1 her family moved to a 25-acre country property on Curtiswood Lane. As a child she walked through a field to nearby Robertson Academy, where grades 1-8 were combined into 4 classes. As a youth she rode the Interurban and streetcars to go shopping, to movies at The Paramount in Nashville, and to Candyland. She spent six summers as a camper and then counselor at Camp Nagawicka in Delafield, WI and described these years as the happiest times of her life. As a teen she loved Broadway musicals and could dance the two-step, waltz, jitterbug, and foxtrot. At 98, she said she could still do the Charleston if she could hold onto something. Mary graduated from high school at Ward Belmont in 1940 and 'signed up' to attend Vanderbilt. While at Vanderbilt University, she majored in political science and joined The Kappa Alpha Theta Sorority. She took a Red Cross Course to help alleviate the nursing shortage created by WWII, and she volunteered with the wounded soldiers. After graduating from Vanderbilt in 1944, she became certified to teach history and political science at Peabody College, but was instead hired as a fifth grade teacher at the Caldwell School in East Nashville. She taught there for four years, while also volunteering with the Junior League Home for children with disabilities from polio. In 1950 she married Howell Jackson Lynch (Jack) and moved to Pulaski, TN where Jack had established a dental practice. They lived on a 40-acre farm and raised four children along with sheep, cattle and horses. Mary liked antiques and old homes, and she treasured living in the 1885 farm house surrounded by large boxwoods. She loved being part of a small town community, and in her free time was particularly devoted to The First Methodist Church, the Giles County Public Library, and the Friends of the New Canaan Ranch. She received the key to the city for her volunteerism. She was very devoted to her children and to Jack. After his death in 1998, she remained in Pulaski until 2011, then moved to Nashville where she lived until her death. Mary blessed those around her with wisdom and patience. She was unassuming and non-judgmental. She was funny, steady, and stoic to the very moment of her death. In addition to her parents and husband, she was predeceased by her son, Howell J Lynch, Jr., her sisters Miriam Anne Farris, Rachael Farris, and Sarah Camille Farris, and her brothers, Willis Farris and Alfred Carter Farris. She is survived by her daughters, Rachel Lynch and Farris Ralston, her son, George Lynch (Amy), her daughter-in-law, Jeanette Lynch, and eight grandchildren, Jackson Lynch, Mary Anne LeBlanc (Hunter), Nicholas Lynch, Mary Ming Lynch, Willis Ralston, James Ralston, Henry Lynch, and Haynes Lynch. She is also survived by Carney Overall Farris, her sister-in-law, and by six nieces and nephews, Willis Farris, Evelyn Farris Raines (Dan), Ginny Gordon (Gilbert), Mary Eleanor McKenzie (Wade), Gus Grote (Leslie), and Jane Grote Hipp (Van). A private family burial will be held in Pulaski, TN at Maplewood Cemetery. Gifts in Mary's memory may be given to The First Methodist Church of Pulaski, where she was a 70 year member, or the Giles County Public Library. (First United Methodist Church, 200 West Jefferson St, Pulaski, TN 38478; The C A Craig Society, Giles County Public Library, 122 South Second Street, Pulaski, TN 38478) Williams Funeral Home is assisting the family with arrangements. Condolences can be given to the family online at www.williamsfh.com.

The family of Mary Lynch created this Life Tributes page to make it easy to share your memories.

Send flowers to the Lynch family.