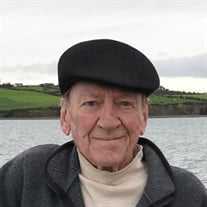 Dr. Maybron Hayes (Mickey) Holland, Jr. of Columbia, Tennessee, age 87, passed away at his home with loved ones by his side on May 30, 2021. Mickey was born in Athens, AL on October 7, 1933 to Ola Ruth Holland and Dr. Maybron Hayes Holland, Sr. The family moved to Pulaski, TN where Hayes was a pharma-cist and owner of Pulaski Drug Store. Mickey and his younger brother Bill often reminisced about the fun times they had at “Pop’s Drugstore”, and no doubt where he acquired a life-long appetite for malted milkshakes. He graduated from Giles County High, where he excelled as a trumpet player, admired by his peers for his proficiency in playing “Flight of the Bumblebee.” Mickey attended University of Tennessee at Knoxville and then to the UT College of Dentistry in Mem-phis, where he completed his Doctorate. A member of the American Dental fraternity, Xi Psi Phi (ZIP), Mickey enjoyed retelling stories of his fraternal antics as well as the consumption of hundreds of hand-rolled tamales sold on the street near the school, never finding another tamale to rival those from his dental school days. Mickey opened his dental practice in Columbia, TN where he practiced for over 25 years, receiving praise from his patients for his gentleness and humanity. He also enjoyed his work as the dentist for both Monsanto and Stauffer companies until he retired. His retirement brought about his second career, as proprietor of Culleoka Catfish Lakes, which he opened on his 200-acre Hillsdale Farm, an 1850’s Antebellum home in Culleoka, TN. An avid outdoorsman, he enjoyed spending time at the lakes ‘shooting the breeze’ with the fishermen. Mickey was preceded in death by his parents and his younger brother, Dr. William A. Holland, Sr. He is survived by his two daughters Dana Holland-Beickert (Matt) of Germantown, TN and Daye Eddy (Kyle) of Alpharetta, GA; and four grandchildren, Ryan Eddy, Austin Beickert, Courtney Eddy and Lauren Beickert. A private memorial and celebration of life with family and close friends will be held at a later date. Williams Funeral Home & Crematory is assisting the family with arrangements. Condolences can be given to the family at www.williamsfh.com.

Dr. Maybron Hayes (Mickey) Holland, Jr. of Columbia, Tennessee, age 87, passed away at his home with loved ones by his side on May 30, 2021. Mickey was born in Athens, AL on October 7, 1933 to Ola Ruth Holland and Dr. Maybron Hayes Holland,... View Obituary & Service Information

The family of Maybron Hayes Holland Jr. created this Life Tributes page to make it easy to share your memories.

Send flowers to the Holland family.