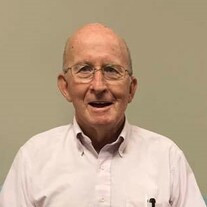 Mel Bunch left earth for heaven on January 15, 2021, after a long battle with Parkinson's Disease. He is rejoicing in the arms of Jesus and reunited with the love of his life, Phyllis. He was born in Harlan County, Kentucky, the third son of Gladys Lee Bunch and Charles E. Bunch who preceded him in death. He is also preceded in death by his older brothers, Harold Lincoln Bunch and Henry Howard Bunch as well as the love of his life, wife of 53 years, Phyllis Durham Bunch. He is survived by his 3 children and their spouses: Melinda Bunch Grefseng and husband Bob, Julie Bunch Bauer, Philip Clark Bunch, and wife Nancy. He is "Papaw" to 4 grandchildren and their spouses: Walker Graham, Emily Graham Carson and husband Brandon, Samuel Grefseng and wife Mary-Kathryn Grefseng, Joseph Bauer, Rebecca and Anderson Bunch, as well as 3 great-grandchildren: Kaylee Walton, Luke, and Cooper Carson. Mel is also survived by his second wife, Mary Jo Cooper Ulrich Bunch, and her family. He served joyously as an "honorary grandparent" to the children of most special friends, Mike and Karen Jarrett. A graduate of the University of Kentucky in 1962, he earned a degree in Mechanical Engineering. He was employed by General Electric in Cincinnati in the jet aircraft division. Given the opportunity, he moved his family to Columbia, Tennessee in 1971 to assist in the opening of the General Electric Room Air Conditioner Plant as Quality Control Engineer and various other roles. In 1971 the Bunch family became active members of First Baptist Church. Mel was elected to the office of Deacon, served on several search committees, and volunteered tirelessly on mission trips, and served those in the church family. He was a member of the Seniors Ministry and a prayer group that met for well over 20 years, a tireless prayer warrior for many. Zion Presbyterian Church was a second home for Mel when he attended there with Melinda and Bob during the last year. He was passionate about University of Kentucky basketball, fishing, family camping trips, gardening, woodworking, and being involved in the lives of his children and grandchildren. The family will have a private internment service. Friends and family are invited to a celebration of Mel's life at a later date due to Covid restrictions. Following this celebration, the family invites those attending to a time of fellowship and story-swapping, requesting that you bring a favorite "Mel story". A reminder of this celebration will be posted on social media and at First Family as well as Zion Presbyterian Church. The Bunch family would like to thank caregiver, Sheila Elrod, for her tender care for Mel. He was especially fond of the "big breakfasts" that she prepared. A special thank you to Dr. Ben Gardner, Dr. Janice Vinson, and the nurses and technicians of Hospice Compassus. You all cared for Papa so well. Our entire family appreciates your efforts. In lieu of flowers, the family requests memorials to First Family Missions Fund or Zion Christian Academy.

Mel Bunch left earth for heaven on January 15, 2021, after a long battle with Parkinson's Disease. He is rejoicing in the arms of Jesus and reunited with the love of his life, Phyllis. He was born in Harlan County, Kentucky, the third son... View Obituary & Service Information

The family of Melvin Clark Bunch created this Life Tributes page to make it easy to share your memories.

Send flowers to the Bunch family.