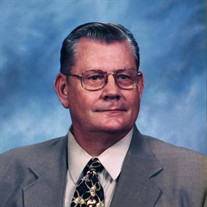 Murray Thomas Culberson, age 80, was called home on Friday, September 17, 2021. Murray was born on May 4, 1941, to the late Murray T. and “Lecie” Clara Bradford Culberson in Maury County, Tennessee. He is a graduate of Central High School. Shortly after gaining his education, he served in the United States Army from 1963 to 1965. Thomas loved his career working for The Coca-Cola Company, where he dedicated 35 hardworking years and held a position as Warehouse Manager until his retirement. Thomas was a loyal and faithful member of Godwin-Chappell United Methodist, as well as the Santa Fe Volunteers for Christ. Thomas had a genuine love for Christ. He enjoyed sharing the good news of Jesus Christ to others through his sermons as a Lay speaker and even just everyday interactions with people. He loved being in the presence of people and spending time with others. Thomas was a very talented singer and musician; loved listening to and singing gospel music, over the years he was able to be a part of several gospel groups. He spent much of his time reading and studying the bible. He was a true “shining light” for the Lord. Thomas was a devoted husband to JoAnne, and a loyal son and brother to his family. He never said an unkind word about others. Thomas was always telling a funny story or a silly joke to make people laugh. You never saw him without his big smile or his gleeful laughter. He was always shaking people’s hands and introducing himself to others, and anywhere he went he instantly becomes friends with everyone in the room. From all his walks of life, he got to know so many members of his community. He will be so greatly missed by all the lives he’s touched. He is preceded in death by his sister, Clara M. Culberson. A visitation will be held Saturday, September 25, 2021 beginning at 1:00 PM, funeral service will follow at 3:00 PM with Pastor Sharlet Panhalkar and Dr. Joe Bowers officiating. Burial will be at Santa Fe Cemetery. Post 19 American Legion will be rendering Military Honors. Pallbearers will be John Thyen, Tommy Edwards, Jared Collier, Daniel Gilliam, Cameron Hood, Chase Hood, Joe Tomlin, and Rayburn Grooms. Honorary pallbearers: Godwin-Chappell United Methodist Church. Memorial contributions in honor of Mr. Murray Thomas can be made to Godwin-Chappell United Methodist Church. Williams Funeral Home is assisting the family with arrangements. Condolences can be given to the family online at www.williamsfh.com.

The family of Murray Thomas Culberson created this Life Tributes page to make it easy to share your memories.

Send flowers to the Culberson family.