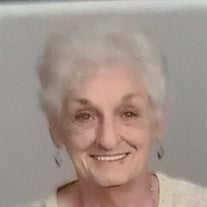 Nancy Marie Beckett, was born on July 7, 1936, in Massillon, Ohio. She was the first child born to her parents Glenn Vernon Steele and Verna Lucille Davis. Some years later the couple divorced. Verna, married Randall Benton Taylor, and over the years, Nancy became a big sister to Curtis L. Taylor (Shelia), and Elyse J. (Taylor) Riddle, both of whom currently reside in Canton, Ohio. In 1955, Nancy Marie Steele Taylor married James Robert Beckett, and they had three children together, Brenda Dell (Beckett) Lewis, James Robert Beckett, Jr, and Jennifer Lea Beckett. Moving from Ohio to South Florida in the 1960’s, Nancy continued the challenges of running the household, dedicating her life to nurturing her children and supporting their education, and many family activities, which included taking care of the beloved family dog, “Babe”. Nancy played hostess to her husband’s numerous business parties, enjoyed deep sea fishing, picnics, and loved early morning swims and beach time on Saturday with the children. Nancy loved sports and a good softball game! After 23 years together the marriage ended in divorce; however, they remained friendly through the years. Later in life, (age 52), Nancy was so happy and excited to find a career she loved, and competing for it as she said, “with all those young bucks”. She said her knees were shaking when staring down the length of that Olympic size pool where she had to swim multiple laps as part of the qualification for the job. Nancy made it on the first try! She had beaten them all and was given the position as Community Service Officer, with the Wilton Manors Police Department in Florida, where she worked as an Accident Investigator, received commendations, and served that community for 10 years, until her retirement. After Nancy retired from the Police Department, she moved to Murfreesboro, Tennessee, to be closer to her children and grandchildren and resided there until her death. Nancy was a daughter, sister, aunt, a mother, grandmother, and great-grandmother. She enjoyed boating, fishing, swimming, international travel, and really enjoyed a good joke. Lots of laughter was the rule! Nancy was called to eternal rest on August 18, 2021, at age 85, in Murfreesboro, Tennessee, due to heart issues. She is preceded in death by her parents and great-grandson Bentley Loyd Beckett. She leaves to cherish her memory three children, Brenda Beckett Lewis (Brian) of Haymarket, Virginia, James Robert “JR” Beckett (Patricia Ann) of New Market, Tennessee, and Jennifer Lea Beckett of Murfreesboro, Tennessee. Her grandchildren, Joseph Charles Beckett (Lori), and Brennen Noel Beckett. And two twin great-grand-daughters, Maddie Lea Beckett and Mackenzie Grace Beckett, nieces, nephews and many friends. Williams Funeral Home is assisting the family with Arrangements. Condolences can be made at williamsfh.com

Nancy Marie Beckett, was born on July 7, 1936, in Massillon, Ohio. She was the first child born to her parents Glenn Vernon Steele and Verna Lucille Davis. Some years later the couple divorced. Verna, married Randall Benton Taylor, and over... View Obituary & Service Information

The family of Nancy Beckett created this Life Tributes page to make it easy to share your memories.

Send flowers to the Beckett family.