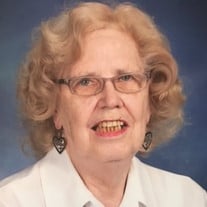 Naomi J. Haywood Bailey, age 88, passed away on October 12, 2020, in her home in Lawrenceburg, TN. Naomi was born on April 14, 1932, in Mason City, Iowa, to her late parents Elmer James and Eleanor Elizabeth Hammon. Naomi worked as an assembly operator for Lasko in Franklin, TN. She was passionate about her church and participating in the choir. Her dogs Rocky and Tiffany were her favorite companions. Naomi spent 12 or 13 years of life caretaking for her mother in her later life. She spent time working with the Pullin family as well, living with them and caring for their family. Naomi graduated from high school in Washington state and met William " Sonny" A. Haywood, who was serving in the United States Air Force at the time. She loved him deeply and spent the next 20 years married to him and raising their children. They moved their family back to Tennessee after William's service in the Air Force ended. She would later marry Willard Bailey and would spend nearly two decades with him. In her spare time, Naomi loved watching the Atlanta Braves. The family will receive friends Friday, October 16, 2020, from 4:00 pm until 8:00 pm at Williams Funeral Home in Columbia. A service will be held on Saturday, October 17, 2020, beginning at 11:00 am at Williams Funeral Home in Columbia. Chadwick Moore (of Mars Hill Baptist Church) and David Buffaloe (of Riverview Baptist Church) will be officiating. Burial will follow at Polk Memorial Gardens. Graveside services will be provided by Chaplain Lanier Nail of the Hospice Care (Compassus). Naomi is preceded in death by her son Keith (Red) Haywood, and both William (Sonny) Haywood and Willard Bailey. Naomi is survived by her sons: Carlton (Snookie) Haywood of Jackson, TN, Robert (Bobby) Haywood; daughters: Eleanor (Steve) Osborne and Elaine (Thomas) Carter; grandchildren: Kristy Osborne, Cody Osborne, Teresa Boyd, John Demastus, Jennifer Osborne Shaffer, Kaleb Haywood, Marvin Haywood, Tracy Haywood Kittrell, Briana Haywood, and Kaitlyn Labonte. She is also survived by her 10 great-grandchildren and 2 great-great grandchildren. Pallbearers for Ms. Naomi will be Cody Osborne, Bobby Joe Haywood, Kaleb Haywood, Will Shaffer, Thomas Shaffer, and Marvin Haywood. Honorary Pallbearers are Robert (Bobby) Haywood and John William Demastus. We want to send a special thank you to the Chaplain and the nurses of Compassus for their caring and support. Williams Funeral Home & Crematory is assisting the family with arrangements. You may send the family your sympathy or share your memories at williamsfh.com.

Naomi J. Haywood Bailey, age 88, passed away on October 12, 2020, in her home in Lawrenceburg, TN. Naomi was born on April 14, 1932, in Mason City, Iowa, to her late parents Elmer James and Eleanor Elizabeth Hammon. Naomi worked as an assembly... View Obituary & Service Information

The family of Naomi Jewell Haywood Bailey created this Life Tributes page to make it easy to share your memories.

Send flowers to the Bailey family.