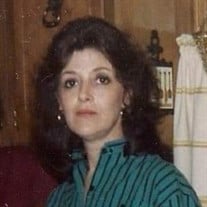 Peggy King McClain, age 78, left this world Sunday, November 28, 2021, to go to her eternal home with Jesus. She has fought health problems hard for the past year and gave it all she had. Now there’s no pain, no worry, no sorrow. She’s in glory. Peggy was born December 19, 1942, to the late Russell Leston (R.L.) King, Jr. and Doris Foster King Chappell. Due to her daddy’s job, they lived in several towns across Tennessee, but Mt. Pleasant was always her home. She graduated from Hay Long High School and married Doug McClain. Together they had four children, two of whom died at birth. Peggy was a hard worker, working numerous jobs like being a secretary for Jim Hamilton when he practiced law and as well as for the weekly newspaper, the Mt. Pleasant Record. Later established a career with Maury Regional Hospital in 1994 where she retired after dedicating 16 ½ years of service. Her joy in life was her family. Peggy adored her two grandchildren and doted even more on her three great-grandchildren. The absolute joys of her life though, were her two fur grandbabies, Abby and Pearl. After they crossed the rainbow bridge, Peggy was never the same. The family will receive family and friends Thursday, December 2nd, 2021 from 11:00 AM to 1:00 PM, at Williams Funeral Home in Mount Pleasant with the funeral service beginning at 1:00 PM. Pastor Mark King will be officiating. Ms. Peggy will be taken to her final resting place in Polk Memorial Gardens in the Garden of Everlasting Life. Peggy is survived by her daughter: Lisa McClain; son: Jeff McClain; granddaughter: Heather McClain (Wesley) Baker; grandson: Brent (Candiace Hensley) McClain; great-grandchildren: Easton DeRidder, Tenley DeRidder, Hunter Floyd; bonus great-grandchildren: Bynlee Baker, and Jesse Hensley; brother-in-law: David Johnson; and several nieces and nephews. In addition to her parents, Peggy was preceded in death by son: Raymond Douglas McClain Jr. and daughter: Julie Ann McClain; granddaughter: Lindsey K. McClain; sister: Shelby King Johnson. Williams Funeral Home is assisting the family with arrangements. Condolences can be given to the family by visiting www.williamsfh.com.

Peggy King McClain, age 78, left this world Sunday, November 28, 2021, to go to her eternal home with Jesus. She has fought health problems hard for the past year and gave it all she had. Now there&#8217;s no pain, no worry, no sorrow. She&#8217;s... View Obituary & Service Information

The family of Peggy Ann McClain created this Life Tributes page to make it easy to share your memories.

Send flowers to the McClain family.