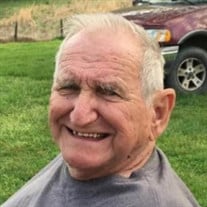 Ralph Louis Przytula, age 86, passed away Friday, September 24th, 2021, in Columbia, Tennessee. Ralph was born on September 12th, 1935, to the late William Chester Przytula and Joan Marie Jelinski in Wyandotte, Michigan. Ralph loved his flea market, but not only did he love it, “He was it!” He ran a Flea Market in Ethridge near the Amish Community, and he just enjoyed spending his time finding new unique pieces from yard sales and estate sales to add to his collection. He had quite a sense of humor and many knew him as a “jokester”, and that was part of his charm with meeting so many people in his community. If you were lucky enough to have known him, very quickly you would discover he is a diehard Detroit Redwings fan and he absolutely adored his family. He will be so deeply missed by all who knew him. Ralph is preceded in death by his wife, Billy, and brother, Joe. He is survived by his three children: Timothy (Kerry) Przytula, Marvalena (Leo) Pritchard, and Dawn (Charlie) Przytula; grandchildren: Daniel (Bree) Reece and Richard (Sarah) Przytula; great-grandchildren: Nikki, Lizzi, Leiah, Marissa, Rori, and Kendall; siblings: Walt Przytula, Maryann (Ken) Wojtkowiak, and Kathleen (Dennis) Pinon; and multiple nieces and nephews. Williams Funeral Home is assisting the family with arrangements. Condolences can be given to the Przytula family by visiting www.williamsfh.com.

The family of Ralph Louis Przytula created this Life Tributes page to make it easy to share your memories.

Send flowers to the Przytula family.