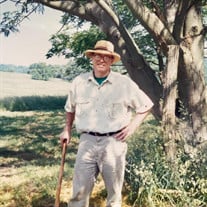 Randolph Scott “Randy” Jackson, 80, died in Columbia, Tennessee on February 10, 2022. He was born in Columbia on January 14, 1942, and was the son of the late Walter Shaw Jackson and Mary Evelyn Rippey Jackson. He was descended from many early settlers of Maury and Williamson Counties, including the Kindel, Cecil, and Perkins families. Randy grew up on a farm on South Cross Bridges Road, the eldest of four children. In 1960, he graduated from Columbia Military Academy, where he was the valedictorian of his class and an All Mid-South football player. Randy attended Georgia Tech and graduated from the University of Tennessee with a degree in chemical engineering in 1965. He was married on August 30, 1963, to Martha Smith Jackson, his loving wife of 58 years, who predeceased him on November 10, 2021. Randy worked at the Monsanto plant in Columbia before he and Martha moved to Houston, Texas, where he had a successful career in management at Monsanto and Sterling Chemicals. After retiring and returning to Maury County, he spent much of his time tending to his farm on West Point Road and preserving his historic antebellum home, Vine Hill, near Cross Bridges. Randy was an avid reader with an extensive knowledge of history, was well-traveled throughout the United States and Europe, and enjoyed running in 5k races well into his 70s. As a young man, he had more than 50 jumps as a skydiver. Randy was proud of the accomplishments of his sons, Randolph Scott Jackson, Jr. (Beth) of Columbia and Gregory Brian Smith Jackson (Roger Moore) of Nashville and Sewanee, who survive him. He is predeceased by his daughter, Daphne Louise Jackson. Randy is also survived by his grandsons Randolph Scott “Rand” Jackson III of Austin, Texas, Montgomery Smith Jackson of Nashville, and Miles Cary Jackson of West Hollywood, California; sister Mary Jackson Cheatham of Culleoka, brother David Brown Jackson of Franklin, and sister Lady Alice Jackson of Chattanooga. The family expresses their heartfelt appreciation to Randy’s caregiver, Christie Pillow. Pallbearers are Mark Hines, Miles Jackson, Montgomery Jackson, Rand Jackson, Zachery Sisk, Tim Smith, and Tony Smith. Memorial contributions may be made to the ALS Society of Tennessee, or a charity of your choice. The family will receive friends on Monday, February 14, from 10:00 to 11:45 a.m. at Williams Funeral Home in Columbia, Tennessee, followed by a graveside service at noon at Polk Memorial Gardens, with the Rev. Jeff Kane officiating.

The family of Randolph Scott "Randy" Jackson created this Life Tributes page to make it easy to share your memories.

Send flowers to the Jackson family.