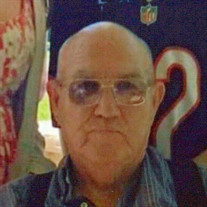 Raymond Lee Reed, 77 of Columbia, passed away on Tuesday, October 19, 2021. Raymond was born on July 1, 1944, to the late John and Opal Reed. He was an equipment operator, contractor and supervisor for the telephone company. Raymond loved to go to Lookout Mountain and look at waterfalls. He enjoyed taking his wife to yard sales and planting flowers. He liked watching westerns, including John Wayne movies, when he could get the DVD player to work. He enjoyed collecting knives and salt and pepper shakers. He loved babies, kids, cats and dogs. He had no filter; he would say what everyone else wanted to say but didn’t have the nerve to. He never met a stranger. Raymond was preceded in death by his: parents, John Hardin and Opal Irene Reed; three brothers: John Robert Reed, Paul Reed and Harold Reed; and one sister, Alta Mae Reed Thomason. Raymond is survived by his: wife, Shelia Reese Reed; three children: Kimberly (Jimmy) Sherrell, James Reed and David (Stephanie) Reed; five grandchildren, six great-grandchildren, several nieces, nephews and cousins; and two special friends and the best neighbors ever, Randy and Martha Goodwin. The funeral service for Raymond will be on Thursday, October 21, 2021, at 1:00 pm at Williams Funeral Home in Columbia with Randy McNeece officiating. Burial will follow in Polk Memorial Gardens. The visitation will be on Wednesday, October 20, 2021, from 4:00 pm until 8:00 pm at the funeral home. Pallbearers for the service will be: James Rizzardi, Michael Reese, Billy Joe Reese, Randy Goodwin, Vance Tankersley and Sam Clark. Honorary pallbearers will be: Marvin “Bubba” Reese, Thomas Reese and Ronnie Reese. Williams Funeral Home is assisting the family with arrangements. Condolences may be sent to the family online at www.williamsfh.com.

Raymond Lee Reed, 77 of Columbia, passed away on Tuesday, October 19, 2021. Raymond was born on July 1, 1944, to the late John and Opal Reed. He was an equipment operator, contractor and supervisor for the telephone company. Raymond loved to... View Obituary & Service Information

The family of Raymond Lee Reed created this Life Tributes page to make it easy to share your memories.

Raymond Lee Reed, 77 of Columbia, passed away on Tuesday, October...

Send flowers to the Reed family.