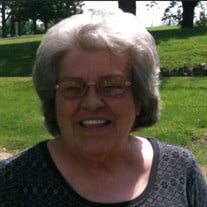 Reba Virginia Osborne Pope went home to be with the Lord on Thursday, March 3, 2022. She was born on October 27, 1947, to Malcolm and Henrietta Phillips Osborne who preceded her in death. Reba lived all her life in Maury County Tennessee, attending several schools. She married Jack Pope on May 11, 1963; they would be married for the next 58 years until her passing. She was a seamstress at Dixie Manufacturing producing dicky pants for adults and children until the facility closed. She spent the remainder of her years as a homemaker for her family. Reba was a strong woman who took great pride in her home and helping her family. Always putting others' needs before her own. She enjoyed country music, especially George Strait, she also enjoyed her shows specifically, “Days of Our Lives”. She actively gardened, fished, and enjoyed traveling. More than anything she loved playing with and spending time with her grandkids and great-grandbabies. She is survived by her husband: Jack “J.D.” Pope who has reunited with her once again two days later; daughter: Rita (Shawn) Casteel; grandsons: Juston (Hailey) Pope, William Casteel; great-grandsons: Elijah Pope, Kaison Pope; sister: Mai Morrow; brothers: Jerry (Janie) Osborne, David Osborne; sister-in-law: Joann Vetzel; along with numerous nieces and nephews. She was preceded in death by her sisters: Marie Manier Haywood, Linda Turner; brother: Valton Osborne; and nephew: Rodger Morrow. Visitation for Reba and J.D. will be held on Thursday, March 10, 2022, from 10:00 a.m. to 2:00 p.m. at Williams Funeral Home in Columbia. Service will begin at 2:00 p.m. They will be laid to rest at Polk Memorial Gardens following the service. The family would like to thank Hospice Compassus, Dr. Gardner, Margo Denman, Rita Pace, Maury Regional 3rd floor staff, and Mark Sells for their assistance and care during this difficult time. In lieu of flowers, the family asks you to visit the gofundme page they have set up to assist in the expenses of funeral costs. Williams Funeral Home is assisting the family with arrangements. Condolences can be given to the family online at www.williamsfh.com.

Reba Virginia Osborne Pope went home to be with the Lord on Thursday, March 3, 2022. She was born on October 27, 1947, to Malcolm and Henrietta Phillips Osborne who preceded her in death. Reba lived all her life in Maury County Tennessee, attending... View Obituary & Service Information

The family of Reba V. Pope created this Life Tributes page to make it easy to share your memories.

Reba Virginia Osborne Pope went home to be with the Lord on Thursday,...

Send flowers to the Pope family.