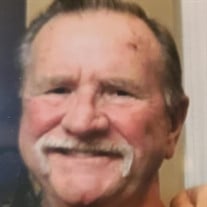 Richard Allen Franks, age 74, passed away Monday, October 25th, 2021 in his Columbia home surrounded by his loving family. Richard was born on March 10th, 1947 to the late Richard E. Franks and June B. Chapman Franks. Richard grew up in Stryker, Ohio, and a graduate of Stryker High School in 1965. He proudly joined and served his country in the United States Marine Corps. In 1990, he moved down south to Spring Hill, Tennessee. Richard retired from General Motors (formerly known as Saturn) working with the Precision Measurement Team for many years. Richard was lucky to have met and married the love of his life, Brenda Crumley, on a very memorable Valentine’s Day of 2006. Knowing Richard, he very much lived the Marine lifestyle, everything had to be precise. Even down to his cologne, he wouldn’t walk out of the house without it. But Richard did not shy away from his comfy attire, always being his true self wearing overalls with untied boots. Richard always felt a strong closeness to the bald eagle. With the Marine lifestyle deeply rooted within him, the eagle’s fierce beauty and the proud independence of this great bird aptly symbolize the strength and freedom of America. That passion sparks joy and pride for Richard while enjoyed collecting eagle statues. He also enjoyed bowling, woodworking, and helping people which got him to know many members of his community. Richard Allen will be so greatly missed by all the lives he touched. A memorial service will be held Saturday, November 6th, 2021 at 2:00 PM, with two hours of visitation prior. Post 19 American Legion will render Military Honors. Join the family in fellowship to honor the wonderful life of Mr. Richard Allen. He is survived by his wife: Brenda; children: Lesley Franks of Kansas, Christopher Franks of Kansas, Dana Jones of Culleoka Tennessee; siblings: Floyd E. Franks of Wauseon, Ohio, Charles (Linda) Franks of Montpelier, Ohio, Patricia A. Rose of Wauseon, Ohio, Thomas G. (Marcia) Franks of Fayette, Ohio; grandchildren: Caden and Brendan Ross of Kansas, Kayla Danielle (Kyle) Allen of Columbia, Zachary Thomas Jones of Culleoka, Tennessee; great-grandsons: Braxton White, Nash White, and Weston Brewer; also many aunts, uncles, cousins, nieces, and nephews; and his special fur baby: Dolly. He is preceded in death by his parents: Richard E. Franks and June B. Chapman Franks; brother: Timothy Franks; sister: Barbara J. Franks; brother-in-law: Alren Dean Rose; niece: Kendra Sue Rose. A special thanks to Don Norman from the Franks family. Williams Funeral Home is assisting the family with arrangements. Condolences can be given to the family by visiting www.williamsfh.com.

The family of Richard Allen Franks created this Life Tributes page to make it easy to share your memories.

Send flowers to the Franks family.