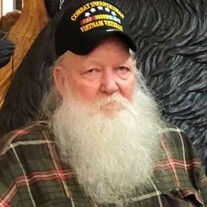 Richard W. Odom, age 78, went on to be with His Lord and Savior on January 05, 2021, at Maury Regional Medical Center in Columbia, TN. Richard was born on July 30, 1942, in Maury County to his late parents Nathan Wilburn and Easter Holden Holt Odom. Richard enlisted in the Army at the young age of 25. He went on to valiantly serve in the 1st Cavalry Division in the Vietnam War from 1967 to 1970. After many years he began to share harrowing stories with his family of the struggles he faced while overseas. Richard worked at Mt. Pleasant Insulation for over 10 years until his retirement. Despite his stature, he was a kind man that had a love for fruit trees, grapevines, and sweet treats. However, what he loves more than anything are his grandchildren. He so enjoyed traveling to Pigeon Forge and Gatlinburg with his family. Richard spent one last time in the Tennessee mountains surrounded by his family, a trip his family will carry with them always. He also enjoyed reading his Bible, listening to Jimmy Swaggart, watching his Western and Christian shows, and of course, you can't forget about wrestling. Richard is preceded in death by his parents and brothers, W. L. Odom and James Ray Odom. Richard is survived by his loving wife Georgia Ann Odom; son: Keith (Kelly) Odom; daughter: Angie (Timmy) Collins; son: Ray (Wendy) Odom; grandchildren: Alyssa (Matt Lee) Odom, Nathan Odom, Krissa (Brad) Wimberley, Steven (Destanee Garcia) Odom, William (Brianna Foss) Luttrell, Chevy Ray Odom, Alexis (Justin Boshers) Willoughby and Carson Willoughby; great-grandchildren: Shane Myers, Anna Myers, Cooper Myers, Skylynn Wimberley, Harper Luttrell, and Georgia Luttrell; and several nieces and nephews. The family will receive friends from 12:00 p.m. until 2:00 p.m. Saturday, January 16, 2021 at Williams Funeral Home in Mount Pleasant. A Memorial Service will immediately follow visitation at 2:00 p.m. The family requests that guests please wear a mask. Williams Funeral Home & Crematory is assisting the family with arrangements. You may send the family your sympathy or share your memories at williamsfh.com.

Richard W. Odom, age 78, went on to be with His Lord and Savior on January 05, 2021, at Maury Regional Medical Center in Columbia, TN. Richard was born on July 30, 1942, in Maury County to his late parents Nathan Wilburn and Easter Holden Holt... View Obituary & Service Information

The family of Richard W. Odom created this Life Tributes page to make it easy to share your memories.

Send flowers to the Odom family.