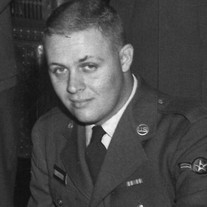 Richard Gregory Roach Sr., age 81, passed away on December 11, 2020, at his home surrounded by family in Columbia, TN. Richard was born on July 28, 1939, in Knoxville, TN to his late parents Royal Victor and Peggy Ethel Gregory Roach. At the young age of 17, Richard enlisted in the U.S. Air Force in Knoxville, TN. He served 24 years in USAF and Air National Guard in Louisiana and Texas. Richard retired from service in 1979 as Senior Master Sergeant. He later opened his own business, Tennessee Simulator Training, at the Nashville Airport, sharing his knowledge and teaching instrument flight training to the public and American Eagle pilots. In addition to teaching others, Richard valued education highly and served as a chairman on the Maury County School Board. Above all, Richard's proudest accomplishment was his family. He cherished his wife, Glenda, of 60 years, 3 children, grandchildren, and great-grandchildren. When he didn't have his eyes on the sky or in a book, he loved being on the water and boating, he instilled this love into his children and grandchildren. He will forever be the captain of his family. A memorial service will be held on Monday, December 14, 2020, at 11:00 AM in the chapel at Williams Funeral Home in Columbia, TN. Richard is preceded in death by his parents and son, David Michael Roach. Richard is survived by his loving wife, Glenda Roach; and his beautiful children: Richard Gregory Roach Jr. (Elvia Espinal), Douglas Roberts Roach, and Lisa Jo Roach (Darryl) Hulen; grandchildren: Leslie Roach, Roland A. Roach, Megan Roach, Jonathan Roach, Holly Ann Baker, Patrick Ryan (Sarah) Baker, Hunter Patrick Hulen; sisters-in-law: Nelda Jane Shields and Jo Roberts; brother-in-law: Jim Roberts; 5 great-grandchildren and 4 nephews. In lieu of flowers, memorials may be made to Ronald McDonald House at Vanderbilt. Williams Funeral Home & Crematory is assisting the family with arrangements. You may send the family your sympathy or share your memories at williamsfh.com.

Richard Gregory Roach Sr., age 81, passed away on December 11, 2020, at his home surrounded by family in Columbia, TN. Richard was born on July 28, 1939, in Knoxville, TN to his late parents Royal Victor and Peggy Ethel Gregory Roach. At... View Obituary & Service Information

The family of Richard Gregory Roach created this Life Tributes page to make it easy to share your memories.

Send flowers to the Roach family.