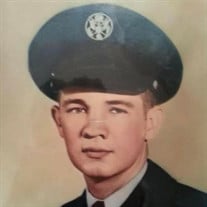 Roger Dwayne Warren, age 90, passed away Thursday, February 3, 2022, in his home surrounded by family in Columbia, Tennessee. Roger was born to the late Porter Carmen Warren and Edna Buffalo Warren on January 14, 1932, in Appleton, Tennessee. Roger has been a long-time faithful member of the church of Christ community in Columbia, Tennessee. He married the love of his life, Vivian Sue Surles, on September 21, 1951, and they raised three beautiful daughters. Roger dedicated 27 years to the Maury County Schools as a Bus Driver until his retirement. Having the privilege of driving bright students from their first days to their last days of class, will be something he always cherished. For many of those years, Roger was a lead driver for Columbia Central High School Marching Band. At one point, Roger was working as a Tour Bus Driver. He was on the road so much that his wife finally decided to hop in along with him and became a Tour Guide herself and they both traveled the USA sharing and showing their knowledge with the world. He will be so deeply missed by all the lives he has touched. The family will receive friends and family Sunday, February 6, 2022, from 8:00 AM to 9:00 AM in the Chapel at Williams Funeral Home in Columbia. A graveside service for Mr. Roger will follow at 10:00 AM, where he will be laid to rest next to his wife at Giles Memory Gardens. In addition to his parents, Roger is preceded in death by his beloved wife of 70 years, Vivian Warren; and his sisters: Pauline Brewer, Elizabeth White, Bettye Dunnavant, and Frances White. Roger is survived by his daughters: Dwayna Hardin, Melinda Marks, Lisa Million; grandchildren: Olivia Hanna Hardin, Carmen Allred, Courtney Stacy, Stratton Marks, Noah Million, Abi Million, Ian Million; five great-grandchildren: Warner and Caroline Allred, Charleigh and Sawyer Stacy, and Stormie Matthews. In lieu of flowers, please consider a memorial contribution in honor of Mr. Roger to the Columbia Central High School Marching Band. Williams Funeral Home is assisting the family with arrangements. Condolences can be given to the family by visiting www.williamsfh.com.

The family of Roger Dwayne Warren created this Life Tributes page to make it easy to share your memories.

Send flowers to the Warren family.